The Paris Hours: A Novel (Paperback) 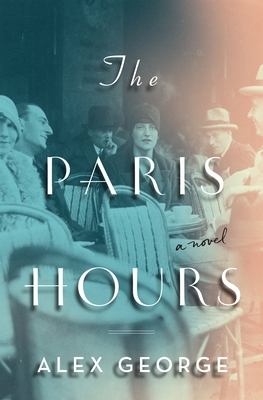 The Paris Hours: A Novel (Paperback)

“Alex George has woven a beautiful tapestry of a historical novel in The Paris Hours through four colorful, intertwining threads. Each of the characters will touch your heart with their stories of love, loss, the ravages of war, and their search for answers and a path to pick up the broken pieces of their lives. Lush with descriptions of 1927’s Paris and the appearance of many famous cultural figures of the era, The Paris Hours will transport readers to a time and place they will be reluctant to leave until the last unexpected moment.”
— Betsy Von Kerens, The Bookworm of Omaha, Omaha, NE

I loved this book so much! What could be better than a story about Paris between the wars? Paris Hours threads the tales of four seemingly unconnected fictional characters into the lives of very well know ones. There is serendipity, intrigue, sadness, triumph, and a touch of madness. Beneath it all is the music and literature and art and food that only Paris, and apparently Alex George, can deliver. I wish I could read it again for the first time. Wonderful!

I loved this book so much! What could be better than a story about Paris between the wars? Paris Hours threads the tales of four seemingly unconnected fictional characters into the lives of very well know ones. There is serendipity, intrigue, sadness, triumph, and a touch of madness. Beneath it all is the music and literature and art and food that only Paris, and apparently Alex George, can deliver. I wish I could read it again for the first time. Wonderful!

“Like All the Light We Cannot See, The Paris Hours explores the brutality of war and its lingering effects with cinematic intensity. The ending will leave you breathless.” —Christina Baker Kline, author of Orphan Train and A Piece of the World

One day in the City of Light. One night in search of lost time.

Paris between the wars teems with artists, writers, and musicians, a glittering crucible of genius. But amidst the dazzling creativity of the city’s most famous citizens, four regular people are each searching for something they’ve lost.

Camille was the maid of Marcel Proust, and she has a secret: when she was asked to burn her employer’s notebooks, she saved one for herself. Now she is desperate to find it before her betrayal is revealed. Souren, an Armenian refugee, performs puppet shows for children that are nothing like the fairy tales they expect. Lovesick artist Guillaume is down on his luck and running from a debt he cannot repay—but when Gertrude Stein walks into his studio, he wonders if this is the day everything could change. And Jean-Paul is a journalist who tells other people’s stories, because his own is too painful to tell. When the quartet’s paths finally cross in an unforgettable climax, each discovers if they will find what they are looking for.

Told over the course of a single day in 1927, Alex George's The Paris Hours takes four ordinary people whose stories, told together, are as extraordinary as the glorious city they inhabit.

A native of England, Alex George read law at Oxford University and worked for eight years as a corporate lawyer in London and Paris. He has lived in the Midwest of the United States for the last sixteen years. He is the founder and director of the Unbound Book Festival, and is the owner of Skylark Bookshop, an independent bookstore in downtown Columbia, Missouri.

Alex is the author of The Paris Hours, A Good American, and Setting Free the Kites.

Praise for The Paris Hours

An IndieNext Pick and Book of the Month Club Selection

“What a design! George expertly crosscuts between various plots, coaxing them closerand closer as evening draws on. The tinder has been set and the fire is lit asthe action converges on a raucous cabaret in Montmartre.”
—The NewYork Times Book Review

“Exquisite…A testimony to the life-changing power of a single day, the book reads like a Jazz Age Les Miserables.”
—Columbia Tribune

"What makes this tale work so well?...George knows his way around the world...He writes with a keen edge...[He takes] readers through the streets of Paris--not the Paris that tourists flock to but the Paris that houses real Parisians."
—St. Louis Post-Dispatch

“The story explores the effects and events of World War I and the magnificence of Paris through the lens of the four characters, and the climax brings their paths together in an exciting read that you won't be able to put down.”
—CNN.com

“No other recent novel both embraces and transcends its Parisian setting like Alex George’s new book, The Paris Hours…Brims with beauty, music, tragedy, uncertainty, and hope…Resonate[s] deeply.”
—Chicago Review of Books

“Paris between the world wars is the setting for this novel, which unfolds over the course of one day in 1927 and includes a cast of characters such as Camille, the maid of Marcel Proust, a journalist named Jean-Paul, a down-on-his-luck artist named Guillaume who has a meeting with Gertrude Stein, and more.”
—New York Post (A Best Book of the Week)

"Four lives converge in this page-turning blend of fact and fiction."
—GoodMorningAmerica.com

“A captivating tale of Parisian life during the roaring ‘20s.”
—BuzzFeed

“Lovingly written and focused in scope, with plenty of mystery and surprises…Those seeking an immersive read set in 1920s Paris will enjoy this emotional ride, providing a glimpse into the desires and lives that walked the streets of Paris in the shadow of the Great War.”
—Historical Novel Society

“Spellbinding…A story steeped in emotion, in yearning, in the desperate wish to change the past, and who among us can’t relate to such a thing?... I raced through the final third, breathless to find out how it would conclude.
—Veranda Magazine (Book Club pick)

“The Paris Hours is the kind of book that almost demands to be devoured; it’s hard to avoid being swept away by the journeys undertaken by each of these regular, yet remarkable people. Evocative and smartly-paced, driven by character and historicity, it’s a fantastic read.”
—The Maine Edge

“An artist, a writer, a puppeteer, and an author’s intimate—the stories of these characters move back and forth in a beautiful dance. And how they come together in the final movement is tre`s belle! George has captured the ethos of 1920s Paris.”
—Library Journal (starred review)

“Enchanting…Like the film Midnight in Paris…the novel has put us under the spell of the City of Light yet again…Stunning.”
—Booklist

“Engrossing…By evoking fictional characters and historical figures with equal vividness and wisely using repeated motifs, George unites his narratives in a surprising yet wholly convincing denouement. Elegant and evocative, this will have special appeal for lovers of Paris and fans of Paula McLain’s The Paris Wife.”
—Publishers Weekly

“Glittering...Compelling and elegantly written, The Paris Hours is a tribute to love, grief and serendipity in the City of Light.”
—Shelf Awareness

“Atmospheric…George’s Proustian homage to a lost time will be a Francophile’s madeleine.”
—Kirkus

“George masterfully concocts a story of people seeking solace, redemption, and answers to the questions that plague them. Like All the Light We Cannot See, The Paris Hours explores the brutality of war and its lingering effects with cinematic intensity. The ending will leave you breathless.”
—Christina Baker Kline, author of Orphan Train and A Piece of the World

“A feast of the human soul. In this stunning novel, George goes behind the glitter of Paris in 1927 and takes you to the rooftops, the skinny alleyways, the flower-strewn parks, and darkened bar rooms to mine the wisdom of humanity. Beautifully rendered; gorgeously told.”
—Jessica Keener, author of Strangers In Budapest

“The kind of novel I always dream about finding: a completely engrossing story that had me canceling plans. I read The Paris Hours without pausing, desperate to see if these marvelous characters could escape the ache of their past. And I gasped when I got to the end.”
—Will Schwalbe, author of The End of Your Life Book Club and Books for Living

“Although Josephine Baker, Marcel Proust, Ernest Hemingway, and Gertrude Stein drift along the edges of this exquisitely written, lovely jewel of a book, the characters who win our true affection are those created with appealing sympathy by George.”
—George Hodgman, author of Bettyville

“George writes movingly of human connection, lost and found. His vivid portrayal of lives intersecting in early 20th century Paris will delight you with its lyricism and touch you with its humanity. The main protagonists are so beautifully drawn they will haunt you long after you reach the end.”
—Melanie Benjamin, author of The Swans of Fifth Avenue and Mistress of the Ritz

“A thrilling, irresistible marvel. In lyrical prose, George weaves together memory, loss, and yearning, portraying his characters with such vivid immediacy that I could imagine myself walking beside them along the winding streets of Paris, sharing their stories. Riveting, heartbreaking, and compassionate.”
—Lauren Belfer, author of City of Light and And After the Fire

“A journey of memory, The Paris Hours is a sensory feast that had me gobbling pages and dreaming myself into the heyday of Paris prestige. You know a novel is great when you finish reading and wish the fiction could be true history.”
—Sarah McCoy, author of Marilla of Green Gables

“The Paris Hours is a kaleidoscope of a novel: intricately constructed, glittering with color and history, playful, poignant, and a joy to hold in your hands. I was transported, seduced, and ultimately moved by spending this day with George’s rich and big-hearted imagination.”
—Christopher Castellani, author of Leading Men

“The Paris Hours weaves together the moving tales of four disparate lives in an ending so stunning I was compelled to return to the beginning and read it again. Kudos, Alex George!”
—Nancy Horan, author of Loving Frank

“The Paris Hours explores, in the course of a single day, the loves, sorrows, and secrets of four ordinary people whose lives touch lightly on the more famous of 1920s Paris: Ernest Hemingway, Marcel Proust, Gertrude Stein, and Josephine Baker. This extraordinarily wise and moving novel is one of the loveliest looks at the world’s most charming city, and at humanity, that I have read. I hated for it to end.”
—Meg Waite Clayton, author of The Last Train to London