Trust Me: A Novel (CD-Audio) 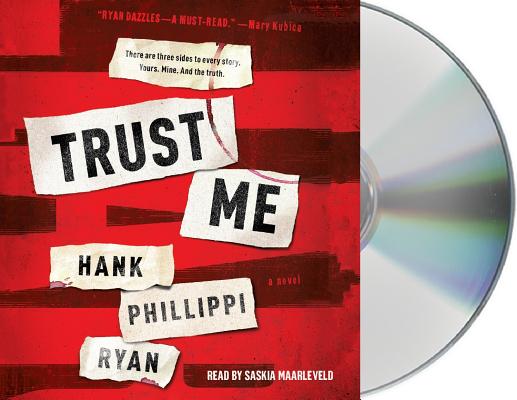 Trust Me: A Novel (CD-Audio)

"Saskia Maarleveld's well-paced narration keeps listeners on the edge of their seats throughout the story's many twists and turns, psychological manipulation, and misdirection." — AudioFile Magazine

Trust Me is the chilling standalone audiobook of psychological suspense and manipulation that award-winning author and renowned investigative reporter Hank Phillippi Ryan was born to write.

An accused killer insists she's innocent of a heinous murder.

A grieving journalist surfaces from the wreckage of her shattered life.

Their unlikely alliance leads to a dangerous cat and mouse game that will leave you breathless.

Who can you trust when you can't trust yourself?

This program includes a bonus interview with the author.

"Grief and deception are at the helm of Hank Phillippi Ryan’s latest thriller, Trust Me, in which a crime writer and an accused criminal’s lives collide, as they come to discover that no one can be trusted, not even oneself." -- Mary Kubica, New York Times bestselling author of The Good Girl

HANK PHILLIPPI RYAN has won five Agatha Awards, in addition to the Anthony, Macavity, Daphne du Maurier, and Mary Higgins Clark Award for her bestselling mystery novels. As an investigative reporter, her work has resulted in new laws, criminals sent to prison, homes saved from foreclosure, and millions of dollars in restitution for victims and consumers. Along with her 34 Emmys and 14 Edward R. Murrow awards, Hank has received dozens of other honors for her ground-breaking journalism. A former president of Sisters in Crime and founder of MWA University, she lives in Boston with her husband, a nationally renowned civil rights and criminal defense attorney. She is the author of Trust Me, and the Jane Ryland series (The Other Woman, The Wrong Girl, Truth be Told, Say No More and What You See).

"Saskia Maarleveld's well-paced narration keeps listeners on the edge of their seats throughout the story's many twists and turns, psychological manipulation, and misdirection." -AudioFile