The Green New Deal: Why the Fossil Fuel Civilization Will Collapse by 2028, and the Bold Economic Plan to Save Life on Earth (Hardcover) 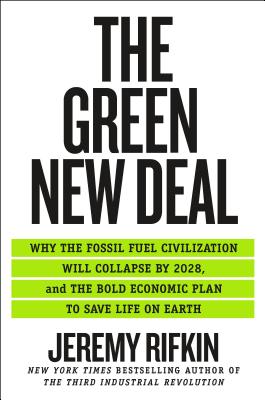 A new vision for America’s future is quickly gaining momentum. Facing a global emergency, a younger generation is spearheading a national conversation around a Green New Deal and setting the agenda for a bold political movement with the potential to revolutionize society. Millennials, the largest voting bloc in the country, are now leading on the issue of climate change.

While the Green New Deal has become a lightning rod in the political sphere, there is a parallel movement emerging within the business community that will shake the very foundation of the global economy in coming years. Key sectors of the economy are fast-decoupling from fossil fuels in favor of ever cheaper solar and wind energies and the new business opportunities and employment that accompany them. New studies are sounding the alarm that trillions of dollars in stranded fossil fuel assets could create a carbon bubble likely to burst by 2028, causing the collapse of the fossil fuel civilization. The marketplace is speaking, and governments will need to adapt if they are to survive and prosper.

In The Green New Deal, New York Times bestselling author and renowned economic theorist Jeremy Rifkin delivers the political narrative and economic plan for the Green New Deal that we need at this critical moment in history. The concurrence of a stranded fossil fuel assets bubble and a green political vision opens up the possibility of a massive shift to a post-carbon ecological era, in time to prevent a temperature rise that will tip us over the edge into runaway climate change. With twenty-five years of experience implementing Green New Deal–style transitions for both the European Union and the People’s Republic of China, Rifkin offers his vision for how to transform the global economy and save life on Earth.

Jeremy Rifkin is president of the Foundation on Economic Trends and the author of more than fifteen bestselling books, including The Hydrogen Economy and The End of Work. He has been a guest on Face the Nation, The Lehrer News Hour, 20/20, Larry King Live, Today, and Good Morning America. The National Journal named Rifkin as one of 150 people in the U.S. that have the most influence in shaping federal government policy. He has also testified before numerous congressional committees, and since 1994, Mr. Rifkin has been a senior lecturer at the Wharton School’s Executive Education Program at the University of Pennsylvania.

Rifkin is chairman of the Global CEO Business Roundtable, which includes IBM, Cisco, Cushman and Wakefield, and has served as an adviser to various global leaders, including Nicolas Sarkozy of France and Angela Merkel of Germany. His monthly column on global issues appears in many of the world’s leading newspapers and magazines, including The Los Angeles Times, The Guardian in the U.K., Die Süddeutsche Zeitung in Germany, Trud in Bulgaria, Clarín in Argentina, and Al-Ittihad in the U.A.E. He lives in Bethesda, MD.

"[Jeremy Rifkin] is a principal architect of the European Union’s long-term economic vision, Smart Europe, and a key advisor to China's Third Industrial Revolution vision...The European Commission is calling for a climate-neutral Europe by 2050. His new book, The Green New Deal, is essentially an attempt to rouse the United States from its slumber within a collapsing 20th century fossil fuel era." —Forbes

“The futurist and prolific author is the kind of thinker popular among chief executives and the TED Talk crowd. So it’s not surprising that ‘The Green New Deal’ takes a stance quite different from that of typical Green New Deal supporters... he’s interested in building factories, farms, and vehicles in a fossil-free world, asserting that ‘the Green New Deal is all about infrastructure.’” —The New York Times Book Review

"[In The Green New Deal], economic theorist Jeremy Rifkin, whose work has inspired climate legislation in China and in various countries in the European Union (E.U.), is well positioned to advocate for this new political vision. In The Green New Deal, Rifkin confronts skepticism about the feasibility of making a transition of the scale required by countering that we are already making these changes in many global regions. It is time, he argues, for the United States to join the E.U. and China as leaders toward a zero-carbon economy." —Science

“An influential advisor to governments the world over and a prolific author in areas of societal importance, Rifkin delivers a passionate vision and practical narrative, based on his extensive experience implementing pioneering changes throughout the European Union and People’s Republic of China.” —Booklist

“An urgent endorsement of efforts to remake a doomed fossil-fuel economy before it's too late.” —Kirkus Reviews

"Jeremy Rifkin is a thinker at the front edge of important issues from genetic engineering to automation. Now he confirms the opportunities that open up if we seize the challenge of rapid reductions in greenhouse gas emissions." —David Suzuki

“Once again, Jeremy Rifkin has wrapped his brilliant mind around humanity’s greatest challenges and makes a compelling case for ending business as usual. The Green New Deal is a clear roadmap for the post-carbon transformation of the US economy and an inspiring vision of what could be the most promising economic opportunity of our lifetimes. It’s a must-read for investors, entrepreneurs and policy makers alike.” —Sir Richard Branson

“Energy is the economic, social, and existential issue of our time. Jeremy Rifkin’s command of the issue in all its shades and shapes is unsurpassed. His narrative deftly deconstructs the future energy problem set, soberly chronicles the zeitgeist, and offers a bold snapshot of the future with an accompanying roadmap. The Green New Deal is singular in its holistic perspective on the necessary energy revolution—from addressing the clean resource mix to identifying financing alternatives to emphasizing the importance of reinventing the oft-forgotten grid infrastructure to the overarching demand for social equity. It’s all here—a must read.” —Anne Pramaggiore, CEO of Exelon Utilities

“Challenging yes! Unrealistically provocative - far from it! Workers want their money invested in a sustainable future with human-centered technology, jobs and a just transition… Jeremy Rifkin provides a realistic timeline and an indispensable roadmap for action. There are simply no jobs on a dead planet!” —Sharan Burrow, Secretary General of the International Trade Union Confederation

“Jeremy Rifkin’s ground-breaking ideas have long been the staple diet of enlightened political leaders across the world. The Green New Deal shows why his work remains more important than ever. In charting the natural decline of fossil fuel industrialization, Rifkin offers a compelling prescription for how the green economy has the potential to unlock the sustainable growth of the future.” —Paul Polman, former CEO of Unilever and Vice Chair of the United Nations Global Compact, the world’s largest corporate sustainability initiative

“Jeremy Rifkin is the economic and ecological worldwide ambassador of the energy transition…he presents a grand scenario for the future: a visionary approach unlike anyone has dared to put forward in the last fifty years. The Green New Deal is a must-read…for grassroots movements and policy-makers in Europe and the United States alike!” —Sigmar Gabriel, former Vice Chancellor and the Minister of Economic Affairs of Germany

"Jeremy Rifkin's The Green New Deal presents the most comprehensive and compelling narrative to transition the U.S. energy, telecommunications, and transportation sectors into a smart Third Industrial Revolution. While our national leaders have been unable to find common ground, Rifkin provides a bipartisan means to accelerate our nation's path toward decarbonization.” —Robert Wilhite, Managing Director, Navigant Consulting, the largest energy and sustainability consulting team in the industry

“The United States is falling behind the European Union and now China in the race to prepare our economies for the low-carbon future. Rifkin’s new book gives the US the crucial narrative it needs to confront the ‘carbon bubble’ of stranded assets increasingly threatening the stability of the global financial system. And his advice is not just for the US. The 9,200 cities that are part of the Global Covenant of Mayors for Climate & Energy have a lot to learn from Rifkin’s work with pioneer smart cities and regions in Europe.” —Maroš Šefcovic, Vice President of the European Commission and Co-Chair of the Global Covenant of Mayors for Climate & Energy

“Rifkin is bold, prescient and revolutionary. The urgent global public health and humanitarian impacts of Climate Change are well upon us and accelerating. Rifkin charts a tough and achievable path forward - Distributed, Open Source, Glocal and Green – and brings us to the threshold of a New Beginning.” —James Orbinski MD, former International President of Doctors Without Borders

“The Green New Deal is impressive in its ability to connect the dots of environmental, political, social and geographical issues that define our sustainable future. Rifkin has laid out a vast Green New Deal plan that is radical and defensible for an historic twenty-year retrofit of the nation’s millions of buildings to reduce global warming emissions, taking us into a green century.” —Gordon Gill, Principal, Adrian Smith + Gordon Gill Architecture (ranked the number one architecture firm in the United States of America by Architect magazine)

“In The Green New Deal, Jeremy Rifkin presents a survival imperative for the millions without work and for a planet that needs healing. In this timely book, he defines the urgent steps that will need to be taken to transition from fossil fuels to renewable energy and reclaim public infrastructure.” —Dr. Vandana Shiva, feminist, ecologist, and recipient of the Right Livelihood Award