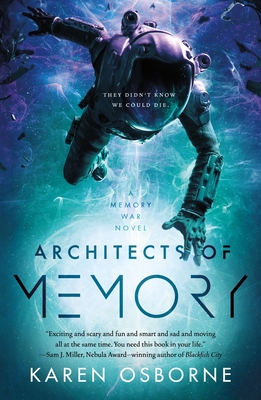 This is book number 1 in the The Memory War series.

SyFY Wire SFF Reads to pick up in September

Terminally ill salvage pilot Ash Jackson lost everything in the war with the alien Vai, but she'll be damned if she loses her future. Her plan: to buy, beg, or lie her way out of corporate indenture and find a cure. When her crew salvages a genocidal weapon from a ravaged starship above a dead colony, Ash uncovers a conspiracy of corporate intrigue and betrayal that threatens to turn her into a living weapon.

KAREN OSBORNE is a speculative fiction writer and visual storyteller living in Baltimore. She is a graduate of Viable Paradise and the Clarion Writers’ Workshop, and won awards for her news & opinion writing in New York, Florida, and Maryland. Her short fiction appears in Uncanny, Fireside, Escape Pod, Beneath Ceaseless Skies, and more. Archtects of Memory is her first novel.

“Osborne’s worldbuilding shines: the rival corporations are seductive, manipulative, and inescapable, and the constraints on Ash’s life as an “uncitizen” are palpable.”—Publishers Weekly

“Exciting and scary and fun and smart and sad and moving all at the same time. You need this book in your life.”—Sam J. Miller, Nebula Award Winning author of The Art of Starving and Blackfish City

“A nonstop dystopian space opera adventure that screams F*** CAPITALISM at the top of its lungs. Equal amounts sweet and painful, but 100% human, this is a mystery and a treatise and a nail-biting kick to the stomach all in one.”—K. A. Doore, author of The Perfect Assassin

“Completely heartbreaking. Utterly brilliant.”—K.B. Wagers, author of A Pale Light in the Black

“An absolutely stunning debut . . . razor-tipped and diamond-sharp. A deadly first shot from one of the most incisive new voices in the genre.”—Tyler Hays, author of The Imaginary Corpse

“Architects of Memory is the queer, nail-biting lovechild of the humanity of The Expanse and the action-fast pulse of Die Hard, and I loved every minute of it.”—A.J. Hackwith, author of The Library of the Unwritten

“... A plot twisty, heart-stealing delight. It’s the whole space opera package: the Vai are some of the most perspective-shifting, most poignant, most alien extraterrestrials I’ve ever encountered, the corporate overlords have their scum dials turned up to eleven, and the love story at its core is tragic and hopeful and beautiful all at once. It’s a safe bet that this debut is the start of something really special.”—Bryan Camp, Author of The City of Lost Fortunes and Gather the Fortunes