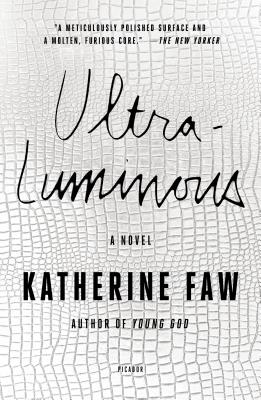 K is an escort with a heroin addiction who has just returned to New York after working for 7 years in Dubai. In what will be her one last year, she seeks out clients in the world of high finance, she falls in love with a veteran, and she remembers her time spent with the Sheikh, a bomb maker for hire. I was floored by the raw emotion evoked by the directness of Faw’s prose. And the last 5 pages are jaw dropping! - randy's December Staff Pick, 2017

“No one is just one thing. Take K, for instance: She spends her days getting just high enough and managing the men who pay her for sex. Time passes in a blur of heroin, hedonism, and risky sushi from Duane Reade, but underneath that routine is something else. And it is this something else that is with K all the time, throughout the manicures and the art films and the stain on the ceiling above her bed and the memories of what came before. Who is K, really? Ultraluminous is raw, hideous, and beautiful, an open wound of a book.”
— Lauren Peugh, Powell's Books, Inc, Portland, OR

From Katherine Faw—the author of the critically-acclaimed Young God, longlisted for the Flaherty-Dunnan First Novel Prize—comes Ultraluminous, a provocative and scintillating novel of one woman’s journey through a life of money, sex, and power.

A high-end, girlfriend-experience prostitute called K has just returned to her native New York City, after more than a decade abroad in Dubai with a man she recalls as the Sheikh. She sets up a rotation of clients—all of them in finance, each with different delusions of how he is important to her—and makes time for a former Army Ranger who served in Afghanistan, whom she doesn’t charge.

Her days are strangely orderly: a repetition of dinners, personal grooming, museum exhibitions, sex, Duane Reades (she likes the sushi), cosmology, sex, gallery shows, nightclubs, heroin, sex, and art films. She finds the pattern substantiating, but does she really believe it’s sustainable? Or do the barely discernible rifts suggest a pattern within the pattern, a larger scheme she’s not showing us, a truth that won’t be revealed until we can see everything?

Katherine Faw’s debut novel, Young God, was long-listed for the Flaherty-Dunnan First Novel Prize and named a best book of the year by The Times Literary Supplement, The Houston Chronicle, BuzzFeed, and more. Her second novel is Ultraluminous. Formerly known as Katherine Faw Morris, she was born in North Carolina, and lives in Brooklyn.

"Startling, poignant, raw . . . The success of Faw's seismic story lies in a protagonist who, however improbably her life, is dynamic, true, and ultimately her own savior. Daring and original." —Katharine Uhrich, Booklist

"Faw’s second novel (after Young God) pulses with an irresistible voice and the sense of impending catastrophe . . . Faw’s writing is raw . . . an exceptionally clear and memorable prose style." —Publishers Weekly

“Seductive . . . Reading [Young God] is like having a bottle rocket go off in your hands.” —Lisa Shea, Elle

“A powerful portrait of humanity in the face of everyday atrocity . . . It’s a quick read but likely to leave even the sturdiest stunned.” —Eimear McBride, The Guardian

“Sweet Jesus is Young God terrifying and great. Katherine Faw Morris’s style is singular and ferocious and Nikki is one of the toughest, most electrifying, most unforgettable heroines I have ever encountered on the page. This is a furious blaze of a book that will rough you up and reorder your sense of the world and what’s possible in it. It’s a debut for the ages. Read it.” —Laura van den Berg, author of The Isle of Youth

“Like a bullet, like a bolt of lightning, like a speeding car, this debut novel goes faster and harder than anything you're likely to read this year.” —Stacey D’Erasmo, author of The Art of Intimacy

“Poetic, grim, and beautifully dark . . . Morris writes with splendid economy, chapters short as contests, and plenty of slashing insights on the rough world of throwaway lives and varieties of wrong.” —Daniel Woodrell, author of Winter’s Bone