The Descent of Monsters (The Tensorate Series #3) (Paperback) 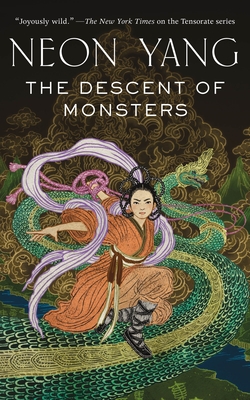 This is book number 3 in the The Tensorate Series series.

Neon Yang continues to redefine the limits of silkpunk fantasy with their Tensorate novellas, which the New York Times lauded as "joyously wild." In this third volume, an investigation into atrocities committed at a classified research facility threaten to expose secrets that the Protectorate will do anything to keep hidden

You are reading this because I am dead.

Something terrible happened at the Rewar Teng Institute of Experimental Methods. When the Tensorate’s investigators arrived, they found a sea of blood and bones as far as the eye could see. One of the institute’s experiments got loose, and its rage left no survivors. The investigators returned to the capital with few clues and two prisoners: the terrorist leader Sanao Akeha and a companion known only as Rider.

Investigator Chuwan faces a puzzle. What really happened at the institute? What drew the Machinists there? What are her superiors trying to cover up? And why does she feel as if her strange dreams are forcing her down a narrowing path she cannot escape?

The Tensorate Series
Book 1: The Black Tides of Heaven
Book 2: The Red Threads of Fortune
Book 3: The Descent of Monsters
Book 4: The Ascent to Godhood

PRAISE FOR THE TENSORATE SERIES

“Yang’s masterful world building is on display, from the manipulation of the metaphysical “slack” to the creatures who inhabit the harsh mountains, made even more impressive by the nonlinear narrative structure. The Old World feel of their "silkpunk" fantasy is made modern by smoothly interwoven gender-nonbinary characters, whose richness enhances the emotional impact of this short but compelling work.” —Booklist on The Descent of Monsters

“Yang conjures up a world of magic and machines, wild monsters and sophisticated civilizations, that you'll want to return to again and again.” —Annalee Newitz for Ars Technica

“A fascinating world of battles, politics, magic and romance.” —Zen Cho, author of Sorcerer to the Crown

“Filled with memorable characters and set in a wonderfully imaginative and original universe.” —Aliette de Bodard, Nebula Award-winning author of The House of Shattered Wings

“Like a Miyazaki movie decided to jump off the screen and sear itself into prose, and in doing so became something entirely new.” —Indrapramit Das, author of The Devourers

“Yang's prose carries the reader along... A really good book.” —Locus on The Black Tides of Heaven