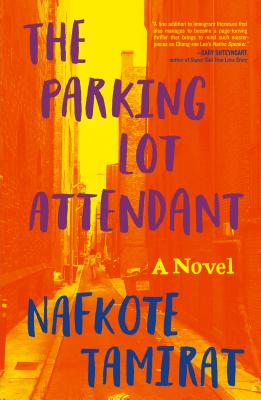 Reading this book is like standing on the edge of a high ledge, looking down and feeling your chest tighten. You will fear Ayale, AND you will cling to his every word, just as the narrator does.

A mesmerizing, indelible coming-of-age story about a girl in Boston's tightly-knit Ethiopian community who falls under the spell of a charismatic hustler out to change the world

A haunting story of fatherhood, national identity, and what it means to be an immigrant in America today, Nafkote Tamirat's The Parking Lot Attendant explores how who we love, the choices we make, and the places we’re from combine to make us who we are.

The story begins on an undisclosed island where the unnamed narrator and her father are the two newest and least liked members of a commune that has taken up residence there. Though the commune was built on utopian principles, it quickly becomes clear that life here is not as harmonious as the founders intended. After immersing us in life on the island, our young heroine takes us back to Boston to recount the events that brought her here. Though she and her father belong to a wide Ethiopian network in the city, they mostly keep to themselves, which is how her father prefers it.

This detached existence only makes Ayale’s arrival on the scene more intoxicating. The unofficial king of Boston’s Ethiopian community, Ayale is a born hustler—when he turns his attention to the narrator, she feels seen for the first time. Ostensibly a parking lot attendant, Ayale soon proves to have other projects in the works, which the narrator becomes more and more entangled in to her father’s growing dismay. By the time the scope of Ayale’s schemes—and their repercussions—become apparent, our narrator has unwittingly become complicit in something much bigger and darker than she ever imagined.

Nafkote Tamirat is a native of Boston. She holds an MFA from Columbia University. Her short stories have appeared in Birkensnake, The Anemone Sidecar, and Best Paris Stories. The Parking Lot Attendant is her first novel.

"Bold and original." --The New Yorker

"Tamirat is an extremely talented writer. Her prose is sharp, incisive, and often very funny. There are dazzling passages...Tamirat's strain of absurdism is delightfully reminiscent of both Kafka and Jonathan Lethem." --Emily St. John Mandel, The New York Times Book Review

"[Tamirat] deftly intermixes genres in her highly unusual migration story...Her tale of uprootedness nods to familiar themes—the quest for status and a sense of belonging, tensions between family ties and personal agency, the fraught search for identity. But Tamirat feels free to cut across boundaries, blending surreal suspense with psychological realism."--The Atlantic

"Ms. Tamirat has reason to be confident. When her novel is good, it’s very good indeed." --Sam Sacks, The Wall Street Journal

"[An] enjoyable debut...Tamirat wonderfully captures her narrator’s teenage capriciousness, particularly in her feelings for Ayale, which slew between idolatry, infatuation, anger and disgust." --AM New York

"A worthwhile and spooky read... it's a captivating story, and we come to care deeply for the unnamed narrator, a lonely, brave teenage girl who falls under the spell of a charming, mysteriously rich parking lot attendant named Ayale." --The Star Tribune (Minneapolis)

"An unsettling, inventive debut novel...On the level of both prose and story, The Parking Lot Attendant feels startling and new.” --Electric Literature, 46 Books By Women of Color to Read in 2018

"A searing novel about identity in America today." --Book Riot

"This debut novel contains multitudes." --Bustle, 11 New Books by Women of Color Everyone Needs to Read in 2018

"Elegant...articulate and graceful... This immersive style of Tamirat’s writing is enthralling from the beginning to the end." --The Harvard Crimson

"Immersive, relevant, and utterly engrossing. This is a first effort from a fascinating artist determined to remind us that while easy answers may exist, they are fraught with a sort of peril to be avoided at all costs. . .It is fairly astounding just how gracefully a very small, very personal story turns into something much bigger." --Pop Matters

"Mysterious and steadily exciting...Tamirat’s razor-sharp prose fashions a magnificently dimensional and emotionally resonant narrator, herself a storyteller who frames her own tale with beguiling skill. This debut is remarkable in every way." --Booklist (starred)

"Captivating for both its unusual detail and observant take on teenage trust. Curious and delightful." --Kirkus

"Nafkote Tamirat is a wonderful writer -- generous and funny, intelligent and astute -- and The Parking Lot Attendant is a spectacularly smart and moving novel I couldn't put down. A fantastic debut by a writer with talent in spades." --Molly Antopol, author of The UnAmericans

"What does a girl do with parents who continually disappoint, with the desire to know a country that has made her, but she has never seen, with the overtures of a magnetic stranger, with her own haunting loneliness? Tamirat answers these questions and more in a thoughtful meditation on the thorny barbs of friendship, family, and patriotism in this fine debut novel. Steeped in allegory and dark humor, The Parking Lot Attendant will leave you wanting more, contemplating the impossibility of ever truly knowing the people you love." --Naomi Jackson, author of The Star Side of Bird Hill

"Nafkote Tamirat is a blazing new talent. The Parking Lot Attendant reads like David Mitchell and Graham Greene decided to collaborate on a novel. But guess what? Neither of those dudes could come up with something like this. Wild and witty, funny and rueful this is the enviable debut of a spectacular artist." --Victor LaValle, author of The Changeling