The Mother-in-Law: A Novel (Paperback) 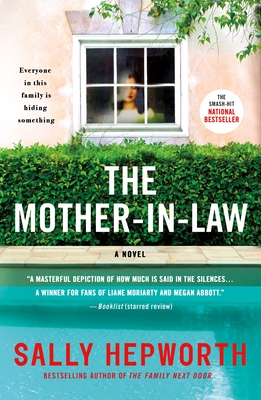 The Mother-in-Law: A Novel (Paperback)

A twisty, compelling new novel about one woman's complicated relationship with her mother-in-law that ends in death...

From the moment Lucy met her husband’s mother, she knew she wasn’t the wife Diana had envisioned for her perfect son. Exquisitely polite, friendly, and always generous, Diana nonetheless kept Lucy at arm’s length despite her desperate attempts to win her over. And as a pillar in the community, an advocate for female refugees, and a woman happily married for decades, no one had a bad word to say about Diana…except Lucy.

That was five years ago.

Now, Diana is dead, a suicide note found near her body claiming that she longer wanted to live because of the cancer wreaking havoc inside her body.

But the autopsy finds no cancer.

It does find traces of poison, and evidence of suffocation.

Who could possibly want Diana dead? Why was her will changed at the eleventh hour to disinherit both of her children, and their spouses? And what does it mean that Lucy isn’t exactly sad she’s gone?

“With jaw-dropping discoveries, and realistic consequences, this novel is not to be missed. Perfect for lovers of Big Little Lies.” —Library Journal, starred review

"Hepworth deftly keeps the reader turning pages and looking for clues, all the while building multilayered characters and carefully doling out bits of their motivations." —Booklist

Sally Hepworth has lived around the world, spending extended periods in Singapore, the United Kingdom and Canada. She is the author of The Secrets of Midwives, The Things We Keep, The Mother's Promise, The Family Next Door and The Mother-in-Law. Sally now lives in Melbourne with her husband, three children, and one adorable dog.

Praise for The Mother-in-Law:

"A deliciously entertaining novel about one woman's complicated relationship with her mother-in-law that ends in death. This one is perfect for fans of Big Little Lies." —Good Morning America

"A masterful depiction of how much is said in the silences...a winner for fans of Liane Moriarty and Megan Abbott." —Booklist, starred review

"This one will keep you guessing until the very end." —Us Weekly

"Hepworth’s short, punchy chapters keep the pages quickly turning while effortlessly deepening her characters. Readers will race to the end of this clever novel to find the truth." —Publishers Weekly

"Behold: the book that'll make your subway ride an actual enjoyable experience! This suspenseful thriller is impossible to put down." —Cosmo

“We devoured it in just one sitting. Bet you will too!” —Woman's Day

"Get ready for the kind of Gone Girl-level twists you may have fantasized about during awkward holiday gatherings." —Refinery29

"A delightfully twisty domestic suspense novel...fans of Big Little Lies and Then She Was Gone will love the startling end." —Shelf Awareness

"The Mother-in-Law is indeed twisty and suspenseful, but even more than that, it's clever and nuanced." —Kelly Rimmer, USA Today bestselling author of Me Without You

"Absolutely stunning. The Mother-in-Law has so many layers - I'll be thinking about it for a long time." —Heather Gudenkauf, NYT bestselling author