To the Mountaintop: My Journey Through the Civil Rights Movement (New York Times) (Paperback) 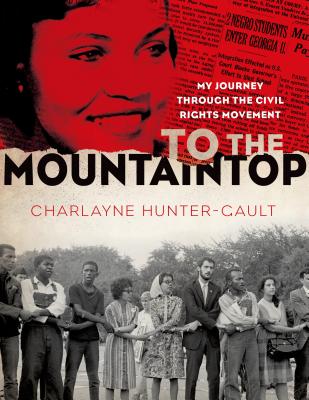 To the Mountaintop: My Journey Through the Civil Rights Movement (New York Times) (Paperback)

A personal history of the civil rights movement from activist and acclaimed New York Times and NPR journalist Charlayne Hunter-Gault.

On January 20, 2009, 1.8 million people crowded the grounds of the Capitol to witness the inauguration of Barack Obama. Among the masses was Charlayne Hunter-Gault. She had flown from South Africa for the occasion, to witness what was for many the culmination of the long struggle for civil rights in the United States. In this compelling personal history, she uses the event to look back on her own involvement in the civil rights movement, as one of two black students who forced the University of Georgia to integrate, and to relate the pivotal events that swept the South as the movement gathered momentum through the early 1960s.

With poignant black-and-white photos, original articles from The New York Times, and a unique personal viewpoint, this is a moving tribute to the men and women on whose shoulders Obama stood.

Charlayne Hunter-Gault, author of To the Mountaintop, is a journalist and foreign correspondent for NPR. In 1961, she was one of two black students to desegregate the University of Georgia. She later went on to win two Emmy awards and a Peabody award for her work with PBS's The NewsHour. She currently divides her time between South Africa and Martha's Vineyard, Massachusetts.

“The book deftly combines memoir and history, and includes many full-text articles from the New York Times's coverage of the period.” —VOYA

“* This powerful complement to the civil rights canon draws a compelling line from the beginnings of the movement 'to the Voting Rights Act of 1965, which opened the door to the long corridor that led to the White House in January 2009.” —Booklist, starred review

“This gracefully written history affirms the importance of the struggle, the difficulties, and the efforts of so many, echoing an Obama campaign statement, ‘I stand on the shoulders of giants.' ” —The Horn Book Magazine

“* Emotionally engaging, eye-opening, and thoroughly accessible, this historical memoir (published in association with the New York Times) illustrates how the personal becomes political by placing the author's individual battle for equal education in the context of the larger civil rights movement.” —Publishers Weekly, starred review