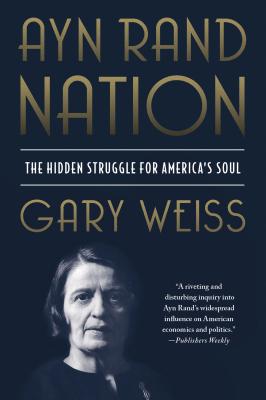 By Gary Weiss
$22.99
Not on our shelves at the moment, but we will order it for you.
(This book cannot be returned.)

Now with a new afterword on Rand, Paul Ryan, and the 2012 presidential election, Ayn Rand Nation explores the people and institutions that remain under the spell of the Russian-born novelist. Gary Weiss provides new insights into Rand's inner circle in the last years of her life, with revelations of never-before-publicized predictions by Rand that still resonate today. Lastly, Weiss provides a strategy for a renewed national dialogue, an embrace of the nation's core values that is needed to deal with Rand's pervasive grip on society.

From The Fountainhead and Atlas Shrugged to Rand's lesser-known and misunderstood nonfiction books, Gary Weiss examines the impact of Rand's thinking across our society.

Gary Weiss is a journalist and the author of books probing the underside of finance, Wall Street Versus America and Born to Steal. He was an award-winning investigative reporter for BusinessWeek, and his articles have appeared in Condé Nast Portfolio, Parade magazine, Salon, and The New York Times, among other publications. He lives in New York City.

“Meticulously eye-opening... A scrupulous and sobering investigation, vital for our times.” —Kirkus Reviews

“Gary Weiss brings his skeptical bent and sharp writing to a character who has inspired both fanatical belief and deep derision for decades: Ayn Rand. The book is a compelling journey of discovery about a woman who continues to exert a powerful hold over our society. Weiss shows how Rand is ultimately quite a bit more complicated than either her fans or her detractors would have it.” —Bethany McLean, New York Times bestselling author of The Smartest Guys in the Room and All the Devils Are Here

“Ayn Rand Nation is a fascinating exploration of one of the fastest-growing and most powerful coalitions in American politics. With an unerring eye for detail, Gary Weiss embarks on a journey of discovery that examines the emerging influence of the Tea Party and other political groups that proclaim themselves to be Rand's intellectual progeny. Weiss explores this phenomenon with the evenhanded and objective techniques of a sociologist. If you want to understand the men and women whose vehement voices are reshaping American government, you must read this book.” —Kurt Eichenwald, New York Times bestselling author of The Informant and Conspiracy of Fools

“The timing of this book couldn't be better for Americans who are trying to understand where in the hell the far-out right's anti-worker, anti-egalitarian extremism is coming from. Ayn Rand Nation introduces us to the godmother of such Tea Party craziness as destroying Social Security and eliminating Wall Street regulation. Weiss writes with perception and wit.” —Jim Hightower, New York Times bestselling author of Thieves in High Places