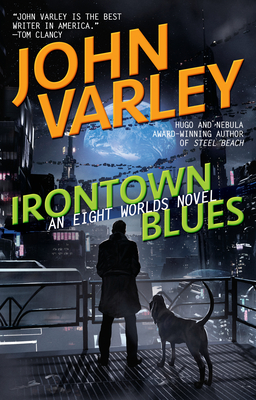 This is book number 4 in the Eight Worlds series.

John Varley was once one of the sharpest voices in science fiction. His Eight Worlds stories were amazing. He has lost none of his humor, his wisdom, his appeal, and his imagination is as rich as ever, as displayed here.  In a sort of end to the trilogy that began with Steel Beech, we return to the Eight Worlds with as stylish, noirish mystery that, being Varley and being very science fiction, ravels in unexpected and magnificent braids. Varley gives us a world as rich as any in literature, characters right out of Chandler, Macdonald, and Hammet, with a story that delights and triggers all those sense-of-wonder nodes good SF targets. - Mark

— From Mark
From a master of science fiction comes a brand-new noir novel set in the Eight Worlds universe, where a detective hunts for the biohackers who have created a dangerous new disease.

Christopher Bach was a policeman in one of the largest Lunar cities when the A.I. Lunar Central Computer had a breakdown. Known as the Big Glitch, the problem turned out to be a larger war than anyone expected. When order was restored, Chris's life could never be the same. Now he's a private detective, assisted by his genetically altered dog Sherlock, and emulates the tough guys in the noir books and movies that he loves.

When Bach takes the case of a woman involuntarily infected with an engineered virus, he is on the hunt to track down the biohackers in the infamous district of Irontown. But if he wants to save humanity, he'll have to confront his own demons.
John Varley is the author of the Gaean Trilogy (Titan, Wizard, and Demon), Steel Beach, The Golden Globe, Red Thunder, Red Lightning, and Rolling Thunder. He has won both the Nebula and Hugo awards for his work.
"This is vintage Varley: supremely weird, superbly told, and with nary a lull in the action."--Cory Doctorow, author of Walkaway and Little Brother, on Boing Boing

"John Varley is the best writer in America."--Tom Clancy

"My life experience of John Varley's stories has been that the great majority of them are literally unforgettable."--William Gibson

"There are few writers whose work I love more than John Varley's, purely love."--Cory Doctorow

"One of the genre's most accomplished storytellers."--Publishers Weekly