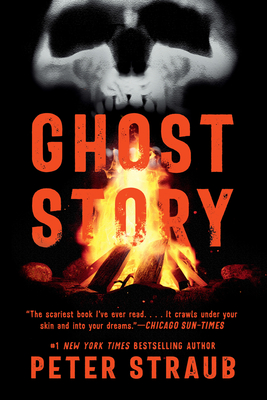 
On Our Shelves Now
#1 New York Times bestselling author Peter Straub’s classic tale of horror, secrets, and the dangerous ghosts of the past...

What was the worst thing you’ve ever done?

In the sleepy town of Milburn, New York, four old men gather to tell each other stories—some true, some made-up, all of them frightening. A simple pastime to divert themselves from their quiet lives.

But one story is coming back to haunt them and their small town. A tale of something they did long ago. A wicked mistake. A horrifying accident. And they are about to learn that no one can bury the past forever...
Peter Straub was the author of seventeen novels, which have been translated into more than twenty languages. They include Ghost Story, Koko, Mr. X, In the Night Room, and two collaborations with Stephen King, The Talisman and Black House. He wrote two volumes of poetry and two collections of short fiction, and he edited the Library of America’s edition of H. P. Lovecraft: Tales and the Library of America’s two-volume anthology, American Fantastic Tales.

In all, Straub’s books and stories were nominated for a dozen World Fantasy Awards, winning four, and 14 Bram Stoker Awards, with ten wins, among many other award nominations. He was named a World Horror Grandmaster in 1997, was given the Horror Writers Association's Lifetime Achievement Award in 2005, was named an International Horror Guild Living Legend in 2008, and received the World Fantasy Convention's Life Achievement Award in 2010. Straub was on the Locus Science Fiction Foundation board of directors for several decades. He passed away in 2022.

“The scariest book I’ve ever read...It crawls under your skin and into your dreams.”—Chicago Sun-Times

“Not since Edgar Allan Poe has an author taken such liberties with his readers’ nerves...A masterwork of horror.”—Cosmopolitan

“One of the most frightening novels you will ever read.”—The Dallas Morning News

“The best thing of its kind since Shirley Jackson’s The Haunting of Hill House.”—Newsweek