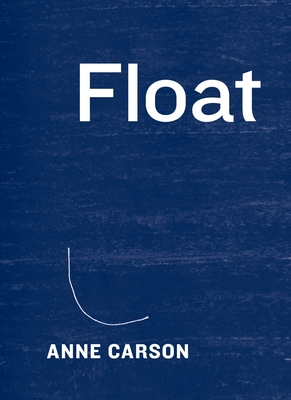 Anne Carson's fans won't need to be persuaded to buy this one, but for any readers of poetry, experimental prose,cultural criticism or the Greek classics who have yet to be converted, you need this. (And if you happen to be shopping for a fan of one of the above for Christmas: they *really* need this.) Presented as a series of chapbooks of poems, essays, dramas, and writings that hover somewhere between genres, all of which can (really!) be read in any order, Float would succeed if it were only a shuffled collection of Carson's astounding, ever-surprising words. What makes it extraordinary, though, is how very much *one thing* this book is. As you craft your own reading experience, the text slyly builds an amazing, personal argument *about* argumentation, how thoughts are formed and stories are told, what makes a work of art or an identity or reality cohesive, and the total joy of exploding that fiction by looking just a bit closer. Exploring everything from Ancient Greek translation to Alzheimers to French New Wave to the silences of Joan of Arc, Float is a substantive experiment in thought and form from a true original. -Kea's October Staff Pick, 2016

— From Kea's Reading List
From the renowned classicist and MacArthur Prize winner: a new collection that explores myth and memory, beauty and loss, all the while playing with--and pushing--the limits of language and form.

Anne Carson consistently dazzles with her inventive, shape-shifting work and the vividness of her imagination. Float reaches an even greater level of brilliance and surprise. Presented in an arrestingly original format--individual chapbooks that can be read in any order, and that float inside a transparent case--this collection conjures a mix of voices, time periods, and structures to explore what makes people, memories, and stories "maddeningly attractive" when observed in spaces that are suggestively in-between.

One can begin with Carson contemplating Proust on a frozen Icelandic plain, or on the art-saturated streets of downtown New York City. Or journey to the peak of Mount Olympus, where Zeus ponders his own afterlife. Or find a chorus of Gertrude Steins performing an essay about falling--a piece that also unearths poignant memories of Carson's own father and great-uncle in rural Canada. And a poem called "Wildly Constant" piercingly explores the highs and lows of marriage and monogamy, distilled in a wife's waking up her husband from the darkness of night, and asking him to make them eggs for breakfast.

Exquisite, heartbreaking, disarmingly funny, Float kaleidoscopically illuminates the uncanny magic that comes with letting go of expectations and boundaries. It is Carson's most intellectually electrifying, emotionally engaging book to date.
ANNE CARSON was born in Canada and has been a professor of Classics for over thirty years. Her awards and honors include the Lannan Award, the Pushcart Prize, the Griffin Trust Award for Excellence in Poetry, and fellowships from the Guggenheim and MacArthur Foundations.
“Carson’s 22 individual chapbooks [are] like snowflakes of literary litheness.” —Sloane Crosley, Vanity Fair Hot Type

“Captivating. A stroke of genius. The most stunning example [of Carson’s work] to date. She designs her books to make you rethink entirely the way you read . . . Float invites you to interact with it, to pull it apart and put it back together . . . The way Carson plans the physical reading experience feels like a magnification of what it’s like to read a really good poem: not straightforwardly but absorbing the sense of it, sounds and senses playing off one another . . . The poems themselves are designed as intricately as the box itself . . . Carson’s work is a question of occupying untranslatable and unpredictable silences, and Float is about finding something whole in fragments. She is a strange and immersive poet. It’s only after reading Float in its entirety that you realise its full effect.” —Charlotte Runcie, The Daily Telegraph (UK)

“If you’re ready to restart your capacity for cosmic delight, vernacular hijinks, and intellectual pizzazz, let inimitable poet, translator, and classicist Anne Carson be your guide in her latest long-form work.” —ELLE

“A motley crew steers Float: Husserl, Picasso, Hegel, a chorus of Gertrude Steins, and Carson’s noble uncle Harry, not to mention the Greeks: late-arriving Odysseus, howling Cassandra, and a rather tetchy Zeus. What else would you expect from [this] renowned classicist, translator, and polymath? Whether one skims or dives, there are treasures to be found. Two playlets plumb family tragedy; [a piece] about the death of Carson’s brother’s wife is a heartbreaker; [two others] are goofy fun. The whole coheres, and the tether is Carson herself—her interests, erudition, and autobiography; the way she thinks, and writes, and occasionally, rhymes.” —Christine Smallwood, Harper’s

“Mesmerizing . . . Float should be read by anyone who has any interest in translation, art, beauty, meaning and the possibilities of a poetic work. Carson, renowned poet, translator and classicist, will never disappoint when it comes to her unique combination of tradition and experimentation . . . In this offering, more than any other [work] to date, we see her true depth as both an inventive thinker and deeply gifted lyrical poet. Float touches every register with clarity and wit, as the chapbooks undulate between the serious and silly, the intellectual and the sentimental . . . Carson, once again, has given us something that can only come from her radiant creativity and illustrious intellect. Float is a book of books; no matter how you read them, or in what order, you will be left hypnotized by its daring scope and peerless creativity.” —Nicodemus Nicoludis, Spectrum Culture

“Float exemplifies Carson’s masterly use of the creative potential of disorder . . . [It] does more than bounce, it buoys up as uninhibited, cosmic ‘flotage.’ It requires ‘unpacking’ because it comes in a clear box containing separate chapbooks of poetry, essays, performance-based texts, and other literary miscellany . . . [But] Float is not a mere victim of entropy—it unequivocally embraces it. It contemplates everyone and everything, from Brigitte Bardot to Hegel, from identity to commodification. There is a beauty to its lack of structure: the reader is meant to shuffle, rearrange, and fall apart at his or her own peril . . . It’s this beautiful lyricism, Carson has remained true to her sensibilities and artistry . . . Throw the booklets in the air. Regard the flotage.” —Taylor Kang, The Culture Trip

“Carson expands her reputation as a genre-defying innovator with her latest book-as-art-object. This is a freewheeling collection, a wildly open text at one moment deeply philosophical, at the next self-effacing and humorous . . . Each section of these 23 individual chapbooks exhibits its own merits, illuminating some new facet of Carson’s intellect or digging deeper furrows into her scholarly pursuits . . . Carson’s whirlwinds of thought, simultaneously swelling and coalescing, disrupt traditional framings, upend cliché, and demand a new kind of candor.” —Publishers Weekly (boxed review)

“Stunning—a marriage of penetrating intellect, inspiring language and the art of the book. Anne Carson seems to know everything. In Float, she offers new poetry and prose presented in separately bound chapters, serendipitously arranged in an attractive acetate case. In chapter after chapter Carson surprises. A visit to the library inside Carson’s head is always worth standing in line for . . . In beautiful packaging and with a subtle balance of erudition, humor, criticism and lyricism, Float is a jaw-dropping achievement.” —Bruce Jacobs, Shelf Awareness

* “A radiant delight . . . a rich gathering of works joining past to present and ancient to modern. Carson is by temperament both experimental poet and traditional classical scholar—heavy on linguistic parsing and close reading on the one hand, and lightning bursts of metaphorical insight on the other. This collection, innovatively presented as a series of chapbooks that can be read sequentially or not as the mood strikes, highlights both interests. These chapbooks variously gather lectures, poems, notes, performance pieces, and miscellanea . . . The poems inhabit the country that lies somewhere between late modernism and postmodernism, often reminiscent of W.S. Merwin and, if he were more inclined to lyric, the late Guy Davenport. The prose pieces touch on themes of classical literature and history . . . Readers of whatever description will enjoy watching Carson's nimble mind at play—and play is just the word, for Carson caresses words, winds them up and watches them go.”  —Kirkus Reviews (starred review)