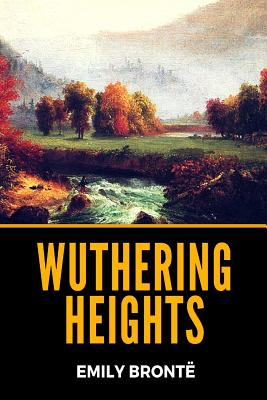 Wuthering Heights is the name of Mr. Heathcliff's dwelling. 'Wuthering' being a significant provincial adjective, descriptive of the atmospheric tumult to which its station is exposed in stormy weather. Pure, bracing ventilation they must have up there at all times, indeed: one may guess the power of the north wind blowing over the edge, by the excessive slant of a few stunted firs at the end of the house; and by a range of gaunt thorns all stretching their limbs one way, as if craving alms of the sun. Happily, the architect had foresight to build it strong: the narrow windows are deeply set in the wall, and the corners defended with large jutting stones. Before passing the threshold, I paused to admire a quantity of grotesque carving lavished over the front, and especially about the principal door; above which, among a wilderness of crumbling griffins and shameless little boys, I detected the date '1500, ' and the name 'Hareton Earnshaw.' I would have made a few comments, and requested a short history of the place from the surly owner; but his attitude at the door appeared to demand my speedy entrance, or complete departure, and I had no desire to aggravate his impatience previous to inspecting the penetralium. - Taken from "Wuthering Heights" written by Emily Bront.