The Failed Joke of the Veiled Prophet: How a Fake Illinois Klansman Became the Grim Symbol of St. Louis's Happiest Civic Celebration (Hardcover) 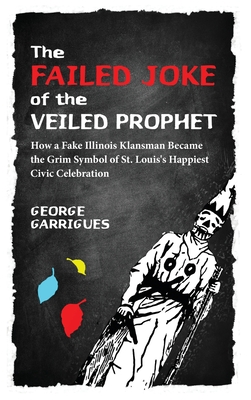 The Failed Joke of the Veiled Prophet: How a Fake Illinois Klansman Became the Grim Symbol of St. Louis's Happiest Civic Celebration (Hardcover)

A WHITE SHEETED THUG in a pointed hat, with pistol and shotguns at the ready. Was he a symbol of privilege and power?

Of class and racial control? If so, why was he surrounded by a bug, a lion, and a lady with a cup of hot chocolate?

The year was 1878. In St. Louis, Missouri, tens of thousands of spectators cheered the downtown arrival of a mysterious "Sublime Hime-uk-amuk of the Veiled Prophets." Decorated floats and cowled men with burning torches moved through the streets and stopped streetcars in their tracks. Some on the floats appeared to be guilty of affectionate embraces even as myriads gaped. Yet most of the "women" were upward-striving men in costume. So were the gods, goddesses, nymphs, and satyrs.

That first Veiled Prophet Parade was a grand success. As was the formal, jewel-encrusted dance afterward, which must have degenerated into a vigorous skipping match once the creaky old folks sat down and left the floor to the youngsters. Throngs were captivated for decades by this annual Parade and its resplendent dance featuring a teenage Queen of Love and Beauty - such as sitcom actress Ellie Kemper, who later apologized for having been one.

Yet in the background for the past score of years has brooded a mysterious, hooded man whose image is as sinister as a Confederate general on his metal horse.

He refuses to die. Who was he?

After 143 years, we now have the answer.