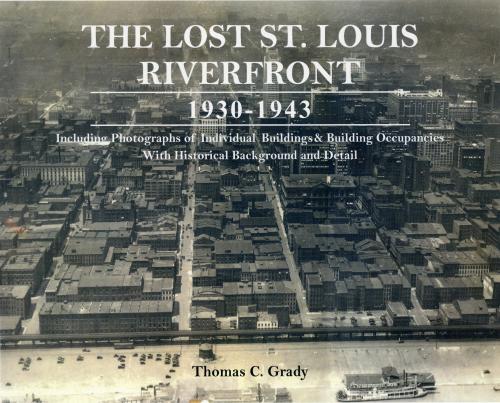 Note that this is for the paperback. The hardcover is no longer available.

St. Louis has a rich architectural legacy that unfortunately has a tendency to get cannibalized. This book is a remarkable time capsule of the city's riverfront before construction of the Gateway Arch forever altered it.

— From Jim
The Lost St. Louis Riverfront 1930 - 1943 is the first study to document fully the history of the area that is now the Gateway Arch National Park on the St. Louis riverfront through historic photographs from the Park Archives. Additional information on the businesses and individuals who occupied these buildings brings to life the monumental impact this project had on the City's sense of identity and its riverfront
Thomas C. Grady was a judge of the Circuit Court of St. Louis for 38 years, retiring January of 2015 . He served as Presiding Judge of the City's Circuit Court from 2007 to 2008 . He was co-chair of the Committee which oversaw restoration of the Civil Courts Bldg. and has been an active member of the Chatillon-DeMenil House Foundation, the St. Louis Mercantile Library at UMSL and the Society of Architectural Historians - St. Louis Chapter . His family has lived continuously in the City for 160 years