And Now We Are Going To Have A Party (Box Set) 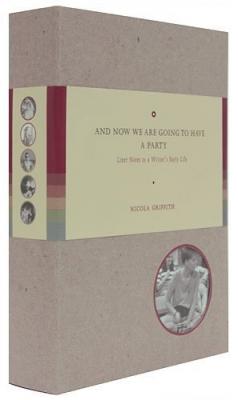 By Nicola Griffith
This book might be hard to find. Ask a bookseller for more information.
Special Order

Award-winning author Nicola Griffith tells her life story up until the time she moved from England to the U.S. This is no ordinary memoir. Nicola is candid and unflinching in telling the ups and downs of her youth. Drugs, sex, and rock ‘n’ roll are just the beginning. To commemorate this extraordinary work, Payseur & Schmidt is issuing a boxed set that includes the memoir bound in five volumes (including diary entries, photographs, poetry, and early fiction). The box also contains a facsimile of Nicola’s first book (created age 4), a CD of songs by Nicola and her early-’80s punk band, Janes Plane, as well as three scratch-n-sniff cards, a fold-out poster, a letter​-​pressed preface by Dorothy Allison, and a numbered signing sheet. This is a limited edition of 450 signed and numbered box sets.

Nicola Griffith is a native of Yorkshire, England, where she earned her beer money teaching women’s self-defense, fronting a band, and arm-wrestling in bars, before discovering writing and moving to the US. Her immigration case was a fight and ended up making new law: the State Department declared it to be “in the National Interest” for her to live and work in this country. This didn’t thrill the more conservative power-brokers, and she ended up on the front page of the Wall Street Journal, where her case was used as an example of the country’s declining moral standards. In 1993 a diagnosis of multiple sclerosis slowed her down a bit, and she concentrated on writing. Her novels are Ammonite (1993), Slow River (1995), The Blue Place (1998), Stay (2002), Always (2007) and Hild (2013). She is the co-editor of the BENDING THE LANDSCAPE series of original short fiction. Her multi-media memoir, And Now We Are Going to Have a Party: Liner Notes to a Writer’s Early Life, is a limited collector’s edition. Her essays and short fiction have appeared in an assortment of academic texts and a variety of journals, including Nature, New Scientist, Los Angeles Review of Books, LitHub, and Quartz. She’s won the Washington State Book Award, the Tiptree, Nebula, and World Fantasy Awards, the Premio Italia, Lambda Literary Award (six times), and others. In 2015 Nicola founded the Literary Prize Data working group whose purpose initially was to assemble data on literary prizes in order to get a picture of how gender bias operates within the trade publishing ecosystem. (The $50,000 Half the World Global Literati Prize was established as a direct result.) The group’s interests have now grown to encompass other aspects of publishing and bias. In 2016 she began #CripLit, an online community for writers with disabilities which hosts a regular Twitter chat. Nicola, now a dual US/UK citizen, is married to writer Kelley Eskridge. They live in Seattle where Nicola is happily lost in the seventh century (writing the second novel about Hild, Menewood), emerging occasionally to drink just the right amount of beer and take enormous delight in everything.

Dorothy Allison, from the preface
“You have here a ring of gold, a reflection of the mental landscape of an extraordinary writer and an astonishingly brave woman. This is a map of the changing world, the world that changed as Nicola became the writer she is, and the world we all share that has changed as so many women and queers and deeply unique outlaw voices began to speak all the stories not told before.”

Michael Upchurch, Seattle Times
“The Seattle novelist (Always) takes an unusual approach to autobiography with this Party, which comes in a box containing five chapbook-memoirs of her English girlhood and wild youth, a CD of songs performed by Griffith (both solo and with her 1980s band Janes Plane), three scratch-and-sniff cards, an autographed baby picture, replicas of her childhood drawings, and more.”

Gary Wolfe, Locus
“[R]emarkable…a do-it-yourself Nicola Griffith home assembly kit…oddly hypnotic, as if someone we barely knew had taken us up into her attic to rummage around in old trunks while telling fascinating stories about each art​e​fact…fiercely honest…’I’m a writer,’ she tells us early on, and she seems fascinated with the archaeology of that statement. By the end, so are we, and we’re convinced of its deep truth.”

Jeff VanderMeer
“[A]mbitious and satisfying, this memoir of a writer’s formative years crackles with intelligence, wit, and pathos. Griffith’s essays about sexuality and her writing are often funny, and always insightful. This box of a book is another shining example of twenty-first-century book-making, and a delight to own.”

James Sallis, F&SF
“Lots of vivid writing here, and no apologies. And over all, that one single thing a writer most often and thoroughly thrashes about in the cane thicket trying to find: a clear voice.”

Paul Di Filippo, Asimov’s
“…a life story wittily and bracingly told: brave, forthright, illuminating, passionate, rueful, and celebratory. If you melded Alison Bechdel’s Fun Home with Aldiss’s The Twinkling of an Eye and Delany’s The Motion of Light in Water, you might come up with a similar tale of a wild girl with literary sensibilities.”

Colleen Mondor, Bookslut
“Somewhere out there a pissed off seventeen-year-old is looking for a reason to believe in the future; give her Griffith’s book and she will know she’s not alone, she will know that what happens next might just might make this whole growing up nightmare worth it.”