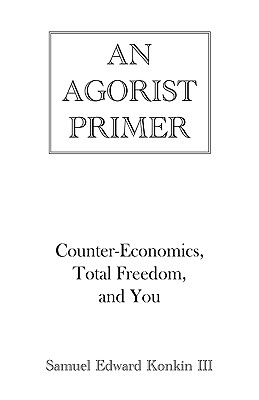 By III Konkin, Samuel Edward
$29.95
Not on our shelves at the moment, but we will order it for you.
(This book cannot be returned.)

In AN AGORIST PRIMER, Samuel Edward Konkin III -- the creator and premier activist and theoretician of Agorism -- introduces the most powerful means to free yourself, protect and increase your wealth, and liberate the whole of human society in the process Agorism is applied Counter-Economics -- the philosophy of engaging in free-market activities in defiance of government control. An evolution of libertarianism, Agorism embraces all non-coercive human action and opposes all force- or fraud-based attempts to stifle innovation, trade, thought, and wealth. If you have ever suspected that government, academia, and other entities are trying to pull the wool over your eyes in order to control your money, your morality, and your life, you'll find answers and remedies in AN AGORIST PRIMER. In one concise volume, Samuel Edward Konkin III explains the theory, principles, and -- most important of all -- the practice of Agorism. If you think that consistency between means and ends matters, this is the book for you From the preface: "Agorism is a way of thinking about the world around you, a method of understanding why things work the way they do, how they do, and how they can be dealt with - how you can deal with them. "Agorism was meant to improve the lot of everyone, not a chosen elite or unwashed underclass. Hence an introductory work that presents ideas without going through the long intellectual history and conflict of competing ideas that produced them. "As the creator of agorism, it is most incumbent on me first to attempt to reduce it to basic intelligibility." Samuel Edward Konkin III is the author of the seminal work on libertarianism and Agorism, New Libertarian Manifesto. Over the course of thirty years, he wrote, edited, and published newsletters and magazines such as Laissez Faire, New Libertarian Notes, and 101 issues of the longest-running publication of its kind, New Libertarian Weekly. Known to his friends as SEK3, Mr. Konkin graduated cum laude from the University of Alberta, serving as head of the Young Social Credit League there. He received his Masters in Theoretical Chemistry at New York University, but left NYU without submitting his Ph.D. dissertation in Quantum Mechanics to pursue his lifelong efforts to promote Counter-Economics and Agorism. He founded the New Libertarian Alliance, the Movement of the Libertarian Left and the outreach organization The Agorist Institute. His body of work is available from KoPubCo. PRAISE FOR SAMUEL EDWARD KONKIN III "Konkin's writings are to be welcomed. Because we need a lot more polycentrism in the movement. Because he shakes up Partyarchs who tend to fall into unthinking complacency. And especially because he cares deeply about liberty and can read and write, qualities which seem to be going out of style in the libertarian movement." --Murray N. Rothbard, Ph.D.