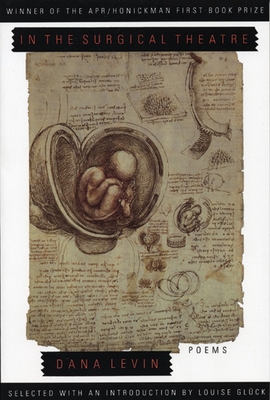 
On Our Shelves (Note - We update this inventory once per day.)
A doctor contemplates Lenin's embalmed body; two angels flank an open chest during a heart transplant; a father's anger turns into a summer thunderstorm... Each of Levin's poems is an astonishing investigation of human darkness, propelled by a sensuous syntax and a desire for healing.

This is the language of a prophet: Levin's art, in this book certainly, takes place in a kind of mutating day of judgment: it means to wipe a film from our eyes. It is a dare, a challenge, and, for all its considerable beauty, the opposite of the seductive...Sensuous, compassionate, violent, extravagant: what an amazing debut this is, a book of terrors and marvels.-Louise Gluck, from the Introduction

Dana Levin was raised in Lancaster, California, in the Mojave Desert. She has received fellowships, grants, and awards from the National Endowment for the Arts, the Academy of American Poets, the Vermont Arts Council, and New York University, where she received her M.F.A. She lives in New Mexico and teaches Creative Writing at the College of Santa Fe.

Dana Levin grew up in California's Mojave Desert. Her first book won the APR/Honickman First Book Prize and PEN/Osterweil Award. Other awards include a grant from the National Endowment for the Arts, two Pushcart Prizes, and a Lannan Fellowship. She was recently selected by Louise Gluck as a 2004 Witter Bynner Fellow. Levin lives and teaches in Santa Fe.