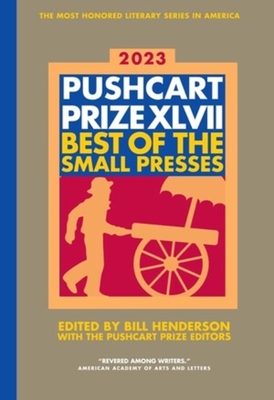 Winner of High Honors from The American Academy of Arts and Letters, Pushcart Prize XLVII includes over 60 stories, poems and essays from dozens of small literary presses .

In last year’s Pushcart Prize, editor Bill Henderson noted that the Pushcart Prize, “the small good thing, has evolved into an international prize drawing nominations from small presses around the globe.” As always, the selections are made by a distinguished panel of Guest Editors and hundreds of Contributing Editors. The list of authors selected and encouraged over the decades, is immense. (An index to previous volumes is included in each edition.)

The Pushcart Prize won the NBCC Sandroff Lifetime Achievement award, The Poets & Writers/ Barnes and Noble Writers for Writers citation and was named by Publishers Weekly as one of the seminal publications in American publishing history.

Bill Henderson is the founder and editor of the Pushcart Prize. He received the 2006 National Book Critic Circle’s Lifetime Achievement Award and the Poets & Writers / Barnes & Noble Writers for Writers Award. He is also the author of several memoirs, including All My Dogs: A Life. The founder of the Lead Pencil Club, Henderson lives on Long Island and In Maine where he runs the Pushcart bookstore – “the world’s smallest bookstore.”