A Two-Spirit Journey: The Autobiography of a Lesbian Ojibwa-Cree Elder (Critical Studies in Native History #18) (Paperback) 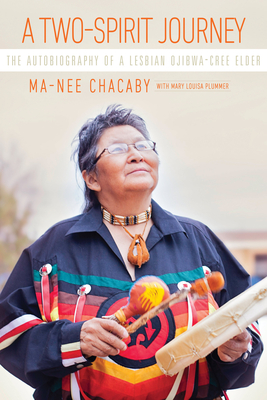 A Two-Spirit Journey: The Autobiography of a Lesbian Ojibwa-Cree Elder (Critical Studies in Native History #18) (Paperback)


Ships quickly (1-7 days)
A Two-Spirit Journey is Ma-Nee Chacaby’s extraordinary account of her life as an Ojibwa-Cree lesbian. From her early, often harrowing memories of life and abuse in a remote Ojibwa community riven by poverty and alcoholism, Chacaby’s story is one of enduring and ultimately overcoming the social, economic, and health legacies of colonialism.
As a child, Chacaby learned spiritual and cultural traditions from her Cree grandmother and trapping, hunting, and bush survival skills from her Ojibwa stepfather. She also suffered physical and sexual abuse by different adults, and by her teen years she was alcoholic herself. At twenty, Chacaby moved to Thunder Bay with her children to escape an abusive marriage. Abuse, compounded by racism, continued, but Chacaby found supports to help herself and others. Over the following decades, she achieved sobriety; trained and worked as an alcoholism counselor; raised her children and fostered many others; learned to live with visual impairment; and came out as a lesbian. In 2013, Chacaby led the first gay pride parade in her adopted city, Thunder Bay, Ontario.
Ma-Nee Chacaby has emerged from hardship grounded in faith, compassion, humor, and resilience. Her memoir provides unprecedented insights into the challenges still faced by many Indigenous people.
Ma-Nee Chacaby is a Two-Spirit, Ojibwa/Cree Elder. She was raised by her Cree grandmother in a remote Ojibwa community near Lake Nipigon, Ontario.

Mary Louisa Plummer is a social scientist and a long-time friend of Ma-Nee. Much of her professional work has focused on public health and children’s rights.