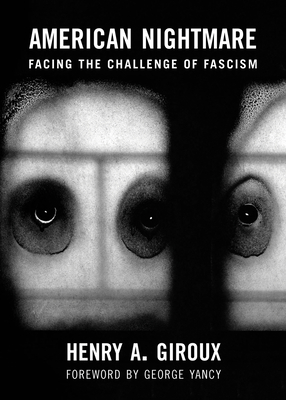 Are we in the beginning of a new fascist era?

As white supremacy, ultra-nationalism, rabid misogyny and anti-immigrant fervor coalesce, a new and uniquely American form of fascism looms. Could our current moment actually bring about the end of democracy in the United States? Are Americans willing to surrender their freedom and dignity, along with their ongoing struggle for equality, justice and mutual respect in the face of the rising tide of political and ideological extremism?

In this provocative collection of essays, Henry Giroux warns of the consequences of doing too little as Trump and the so-called alt-right relentlessly attack critics, journalists, and target the hard-earned civil rights of women, people of color, immigrants, the working class, and low-income Americans. As we face down the frightening reality of living under a system that serves only the interests of the wealthy few, Giroux makes a passionate call for ordinary citizens to organize, educate, and resist by all available means.

In this current era of corporate media misdirection and misinformation . . . Henry Giroux is one of the few great political voices of today, with powerful insight into the truth. Dr. Giroux is defiantly explaining, against the grain, what's REALLY going on right now, and doing so quite undeniably. Simply put, the ideas he brings forth are a beacon that need to be seen and heard and understood in order for the world to progress.--Julian Casablancas, lead vocalist for The Strokes

In frightening times like these, what is desperately needed is an informed and wise voice that speaks clearly and with conviction about the situation we are in, and what can be done. Henry Giroux is one of the great public intellectuals of our times, and American Nightmare is exactly the book for people grappling with how to understand the Trump era and how to proceed. This is precisely the book that needs to be shared with friends and acquaintances. It will provoke hard thinking, bring clarity, and stimulate much needed conversation and action.--Robert W. McChesney, co-author of People Get Ready: The Fight Against a Jobless Economy and a Citizenless Democracy

We have no greater chronicler of these dystopian times. Giroux's critique cuts to the crux of today's authoritarian crisis, yet his voice remains of one hope that the people may collectively regain control. Even while living though systemic efforts to privatize hope, Giroux's critique enacts the sort of shared resistance that can effectively challenge authoritarianism. American Nightmare demonstrates how we can resist the normalization of hate, authoritarianism and alienation in Trump's America. He shows us that not only are we not alone, but we are among a majority who oppose the cruelties of American social policies.--David H. Price, author of Cold War Anthropology: The CIA and the Growth of Dual Use Anthropology

At a moment when the news cycle presents the dangers of Trumpian authoritarianism through disjointed and discrete hottakes, Giroux's wide-reaching analysis accounts for our current American nightmare with necessary historical context, and in so doing creates an aperture for resistance more meaningful than a hashtag.--Natasha Lennard, contributing writer for The Intercept, co-editor of Violence: Humans in Dark Times

In this passionately argued volume, Henry Giroux, long known for his critical commentaries on the de-democratization of the U.S.A., on its rising inequ(al)ity and neoliberal excesses, reflects very thoughtfully on the specter of Trump's America: on its violence, cruelty, and incivility, its burgeoning authoritarianism, its inexorable edging toward a Grave Neo World: in short, a rising specter that demands to be countered at all cost if the U.S. is to be rescued from itself."--John Comaroff, Professor of African and African American Studies and of Anthropology, Harvard University

Henry A. Giroux is a world-renowned educator, author and public intellectual. Giroux holds the McMaster University Chair for Scholarship in the Public Interest, and is the Paulo Freire Distinguished Scholar in Critical Pedagogy. Among most recent books are America at War with Itself (City Lights, 2016); Disposable Futures: The Seduction of Violence in the Age of Spectacle with Brad Evans (City Lights 2015); The Violence of Organized Forgetting (City Lights 2014); Zombie Politics and Culture in the Age of Casino Capitalism (Peter Lang, 2011); On Critical Pedagogy (Continuum, 2011); Education and the Crisis of Public Values (Peter Lang 2012); Twilight of the Social: Resurgent Publics in an Age of Disposability (Paradigm Publishers, 2012);Disposable Youth (Routledge 2012); Youth in Revolt (Paradigm, 2013); America's Education Deficit and the War on Youth (Monthly Review Press, 2013). A prolific writer and political commentator, he writes regularly for Truthout and serves on their board of directors. He lives in Hamilton, Ontario, Canada with his wife, Dr. Susan Searls Giroux. George Yancy is Professor of Philosophy at Emory University. He is the author, editor and co-editor of over 18 books. He has authored numerous scholarly articles and chapters. He is known for his influential essays and interviews in the New York Times' philosophy column, The Stone.