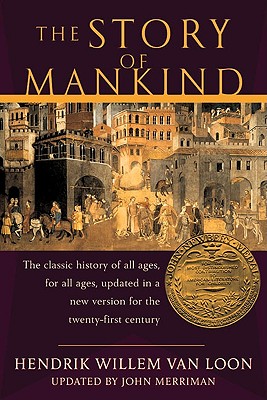 By Hendrik Willem van Loon (Original author), John Merriman, Ph.D. (Retold by)
Email or call for price.
Out of Print

First published in 1921, The Story of Mankind has charmed generations of readers of all ages with its warmth, simplicity, and wisdom. Beginning with the origins of human life and sweeping forward to illuminate all of history, Hendrik van Loon's incomparable prose enlivens the characters and events of every age. His unique ability to convey history as a fascinating tale of adventure has endeared the book to countless readers and has accorded it a unique place in publishing history. This new version, which retains van Loon's original illustrations, has been brought up to date by John Merriman, professor of history at Yale University. It incorporates the most important developments of the last two decades-including space exploration, the emergence of the developing countries, the Cold War, the Internet, and the astounding advances we have witnessed in medicine and science - and looks forward into the prospect of the twenty-first century.

Hendrik Willem van Loon received worldwide acclaim for the many books that he both wrote and illustrated. Among his most beloved are The Story of America, The Story of the Bible and The Life and Times of Rembrandt. European born and educated, van Loon was a professor at Antioch College and lectured at Harvard, Cornell, and the University of Munich.

John Merriman is the Charles Seymour Professor of History at Yale University. A specialist in nineteenth century French history, Merriman earned his Ph. D at the University of Michigan. He is the author of many books, including The Margins of City Life: Explorations on the French Urban Frontier, 1815–1851; Red City: Limoges and the French Nineteenth Century; The Agony of the Republic: The Repression of the Left in Revolutionary France, 1848–1851; and, most recently, The Stones of Balazuc: A French Village in Time (Norton, 2002). He regularly teaches the survey of modern European history at Yale.