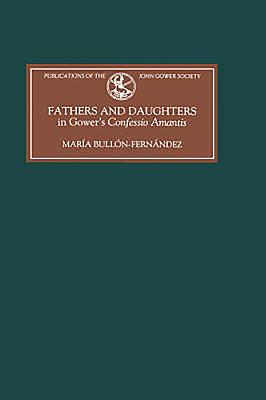 
Ships quickly (1-7 days)
Fathers and daughters are central to some of the most significant tales in Gower's poem. Using feminist and anthropological approaches, Bullon-Fernandez argues that father-daughter relationships, and the associated theme of incestthat they sometimes suggest, enable Gower to examine authority relationships in three interconnected spheres: family, state, and text. She suggests that Gower perceived the relationships between kings and subjects and between authors and texts as similar to paternal relationships with a daughter; and further, that Gower regarded the law of exogamy as at the core of patriarchal society. As a father may not commit incest with his daughter and a king may notabuse his authority, so the writer (as in Pygmaleon and the Statue), must curb his desire to control the meaning of his creation. Thus, even as he is concerned with the limits of authority in the familial, political and textualrealms, Gower also exposes the inherently transgressive nature of such authority. Dr MARIA BULLON-FERNANDEZ is Assistant Professor of Middle English literature, Seattle University.