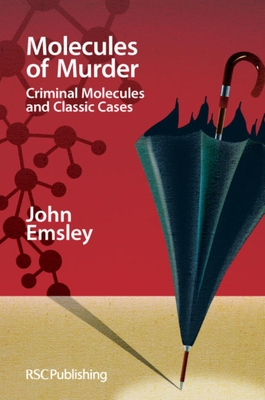 This fascinating book takes the reader on a journey of discovery into the world of dangerous organic poisons. Molecules of Murder describes ten highly toxic molecules which are of particular interest due to their use in notorious murder cases. Each chapter explores the discovery of the molecules, their chemistry and effects in humans, followed by a re-examination of their deliberate misuse in high profile murder cases Molecules of Murder is written by the highly acclaimed, award winning popular science writer John Emsley and makes enthralling reading for both scientists and non-scientists alike.

Dr John Emsley is best known for his series of highly readable popular science books about everyday chemistry, some of which have run into multiple editions and printings in the UK, and all of which have been translated into several other languages. He has also published in national newspapers and magazines, and he has written chemistry text books and booklets for industry. John has a carved an impressive career in popular science writing and broadcasting over the past 20 years, emphasising the benefits of chemistry, and the chemical and pharmaceutical industries. John's chemistry career started in 1960 with a PhD in phosphorus chemistry from Manchester University. With spells at the University of London, Westfield College and Kings College as lecturer and reader, he became science writer at Imperial College and then the University of Cambridge where his prolific writing career took off. With his background in chemistry he has had over 110 original research papers published, mainly on phosphorus chemistry and on hydrogen-bonded systems. He has also had more than 500 popular science articles and features published in: New Scientist, The Independent (for which he did a regular column 'Molecule of the Month' for six years), The Guardian, Chemistry in Britain, Chem Matters, Focus, Science Watch and many more. Some of his best selling popular science books include: Better Looking, Better Living, Better Loving, (2007), Elements of Murder (2005), Vanity, Vitality & Virility (2004), Nature's Building Blocks (2001), The Shocking History of Phosphorus (2000), Molecules at an Exhibition (1998) and The Consumer's Good Chemical Guide (1994, Science Book Award Winner) His skills derive from the objectivity gained through a combination of an academic background and freelance writing. The breadth and the topicality of his coverage of chemical issues is second to none, and ranges from food chemistry to advanced semiconductors, from alchemy to Viagra. Although John is primarily an inorganic chemist he has proved himself capable of covering all branches of chemistry, helped in no small way by his willingness to consult those with specialist knowledge and to enlist them in checking his texts before publication. In this way his writing has gained a reputation for thoroughness of coverage and reliability of content. No science has suffered as much from media alarms and misinformation than chemistry, and much of this would have gone unchallenged but for John Emsley. John is regularly approached by the media and asked to take part in broadcasts, more often simply seeking advice on some aspect of chemistry, and his skill is to be able to provide a clear explanation. He is well-known to many in the media and he has been a stalwart of the Association of British Science Writers for 25 years. Dr Emsley is a great science communicator. His entertaining books have contributed to the advancement of a positive awareness of science and he says of himself in the preface of his book Nature's Building Blocks: 'As a writer of popular science, I am aware of the desire of people to know more of the world about them.'

"This very well written book should find its way into most school libraries, as it will appeal to those - young and old - who are fascinated either by the chemistry involved, or by the history of several murder cases."