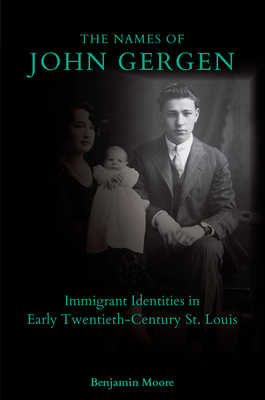 Rescued from the dumpster of a boarded-up house, the yellowing scraps of a young migrant’s schoolwork provided Benjamin Moore with the jumping-off point for this study of migration, memory, and identity. Centering on the compelling story of its eponymous subject, The Names of John Gergen examines the converging governmental and institutional forces that affected the lives of migrants in the industrial neighborhoods of South St. Louis in the early twentieth century. These migrants were Banat Swabians from Torontál County in southern Hungary—they were Catholic, agrarian, and ethnically German.

Between 1900 and 1920, the St. Louis neighborhoods occupied by migrants were sites of efforts by civic authorities and social reformers to counter the perceived threat of foreignness by attempting to Americanize foreign-born residents. At the same time, these neighborhoods saw the strengthening of Banat Swabians’ ethnic identities. Historically, scholars and laypeople have understood migrants in terms of their aspirations and transformations, especially their transformations into Americans. The experiences of John Gergen and his kin, however, suggest that identity at the level of the individual was both more fragmented and more fluid than twentieth-century historians have recognized, subject to a variety of forces that often pulled migrants in multiple directions.

Benjamin Moore is Associate Professor of English and Director of the Bosnia Memory Project at Fontbonne University in St. Louis, Missouri.

“No one has brought into print the details of an individual working-class St. Louisan’s life in anywhere near the depth that Moore has done—and this from what started as a handful of crumbling school assignments found in a dumpster. Moore’s point, however, is for us not simply to discover a once-invisible man, but also to reflect upon the extent to which identity itself is, in this nation, shaped by the collective decisions of the people and institutions that shape our lives and record our traces.”—Eric Sandweiss, Indiana University, author of St. Louis: The Evolution of an American Urban Landscape


“This powerful and painstakingly researched book sheds light on a migration network that connected a multiethnic region in Southeastern Europe with South St. Louis. Moore uses the short and tragic life story of a young immigrant to great effect to evoke the hardship faced by labor migrants in urban America. The study retraces the journey of German-speaking Catholics from Hungary to St. Louis and uncovers the story of a forgotten St. Louis neighborhood, long buried underneath an Interstate and warehouses, but once home to migrants from Southeastern Europe.”—Tobias Brinkmann, Penn State University, editor of Points of Passage: Jewish Transmigrants from Eastern Europe in Scandinavia, Germany, and Britain 1880-1914

"Benjamin Moore’s accidental discovery of 124 pages of schoolwork from a boy, born in 1908, led to years of research and discovery as well as the writing of a biography of not only the boy himself but of the immigrant story. The boy had many names—for the sake of simplicity he is most often referred to as John Gergen—and Moore focuses and expands on this fact in order to reveal the institutional nature of a young immigrant’s identity in early twentieth-century south St. Louis. Moore’s book tells us a story about various forces of Americanization and the immigrants’ resistance to them; it provides us with a local, St. Louis (as well as a German, Banat, Hungarian) example of the immigrant experience."—John C. Swanson, University of Tennessee at Chattanooga, author of Tangible Belonging: Negotiating Germanness in Twentieth Century Hungary

“Moore's tireless research, skillful writing, and commitment to understanding the immigrant experience inform every page of this fascinating book.”—Bonnie Stepenoff, Southeast Missouri State University, author of The Dead End Kids of St. Louis: Homeless Boys and People Who Tried to Save Them