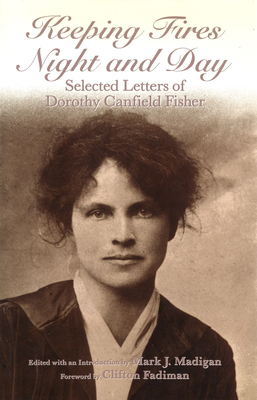 Eleanor Roosevelt called her one of the most influential women in America.  Among the earliest and most assertive members of the Book-of-the-Month Club selection committee, Dorothy Canfield Fisher helped define literary taste in America for more than three decades.  She helped shape the careers of such great writers as Pearl Buck, Isak Dinesen, and Richard Wright.  A best-selling author herself, Fisher was also a deeply committed social activist.  In Keeping Fires Night and Day, Mark J. Madigan collects much of Fisher's copious correspondence.   With letters to Willa Cather, W.E.B. Du Bois, Albert Einstein, Robert Frost, Margaret Mead, James Thurber, and E.B. White, he documents Fisher's personal and professional life and career in a way that no biography could.  Set against the American historical and cultural landscape from 1900 to 1958, these letters offer a firsthand account of one of the twentieth century's most remarkable women.

While Fisher's novels treated such conventional subjects as marriage and domestic life, her own life was anything but conventional.  When her best-selling novels made her the chief breadwinner in her marriage, her husband, John Fisher, quietly assumed the role of secretary and editor of her work.  Fluent in five languages, Dorothy Canfield Fisher founded a Braille press in France and introduced the educational methods of Dr. Maria Montessori to the United States.  She became a pioneering advocate of adult education and served as the first woman on the Vermont Board of Education.

In letters to friends, fans, and colleagues, Fisher discussed her homelife, her work, and the world around her.  Her passions and concerns-revealed in her correspondence with wit and poignancy-include the "New Woman' and the suffrage movement, racial discrimination and the emergence of the NAACP, the development of the national education system, two world wars, the depression, and the influence of book clubs in the literary market-place.

Dorothy Canfield Fisher "helped twentieth-century American literature to come of age," writes Clifton Fadimon in his Foreward.  Yet lasting recognition has eluded her.  In Keeping Fires Night and Day the distinctive voice of this gifted, intelligent and spirited woman is heard once again.

Mark J. Madigan teaches English at the University of Vermont in Burlington.  His essays on American literature, film and pedagogy have appeared in many books and journals.

"This collection contains 189 letters selected from more than 2,500 items, Madigan's gracefully written introduction, a chronology, a bibliography, a calendar of letters, 11 photographs, and notes on 'notable recipients' (including Cather, Du Bois, Albert Einstein, Robert Frost, and E. B. White). The scholarship evident in this book makes it gratifying; Fisher's voice makes it a joy."--American Literary Scholarship

"These letters, impassioned and earnest, show a remarkable woman of letters and literary influence."--Belles Lettres

"Mark Madigan is to be congratulated on the excellence and breadth of his collection. . . . Keeping Fires Night and Day is a book to delight the general reader and whet the appetite of scholars."--Vermont History

"This fine volume is enhanced by a chronology of Fisher's life, an explanation of Madigan's editing practice, primary and secondary bibliographies, a 'Calendar of Letters,' a guide to 'Notable Recipients,' and a detailed index. Strongly recommended for all academic libraries."--Choice

"Mark J. Madigan has collected, edited and meticulously annotated almost 60 years' worth of Fisher's letters. The book is beautifully produced and a joy to read."--Vermont Life

"Mark Madigan has prepared an outstanding edition. His introduction is a model of its kind: clearly organized, informative, gracefully written, it provides essential biographical information, suggests his estimate of Fisher's importance, and sets her within cultural as well as literary context. . . . Fisher is one of those writers destined for a breakthrough in the scholarship, and Mark Madigan's edition of letters is just the thing to make that breakthrough happen."-- Susan J. Rosowski