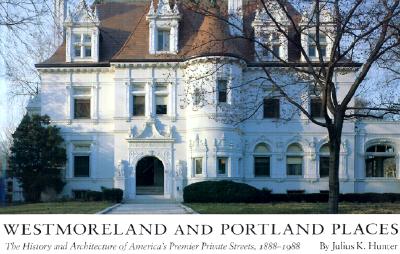 Nowhere in America has the private place flourished as it has in St. Louis, and no private places have played a more important role in that city's or the nation's history than Westmoreland and Portland. Owned by the residents rather than by the city and governed by a board of trustees responsible for lighting, sewers, roadways, security, landscaping, and refuse removal, Westmoreland and Portland are lined with spectactular houses in the style of Italian palazzi, French chateaus, and English country estates.

The residents of Westmoreland and Portland have run many of the largest businesses and industries in St. Louis and in many cases in the United States. In 1904 they were among those who planned one of the most spectacular world's fairs ever, and in 1927 they helped finance Charles Lindbergh's transatlantic flight. They served in the cabinets of presidents Cleveland, McKinley, Theodore Roosevelt, Taft, Wilson, Coolidge, and Hoover. By examining these and many other accomplishments of these families, Julius Hunter provides a unique historical perspective on the past century of American life.

In addition to providing the historical background, Hunter presents vivid descriptions of glamorous social occasions in Westmoreland and Portland--weddings, balls, even funerals--and he shows that the residents were sometimes united, and sometimes split, by bonds of family, marriage, religion, club membership, and political preference. Interviews with people who lived on those streets early in this century provide a unique glimpse of what it was like to grow up in the prestigious neighborhood.

Hunter's text is superbly illustrated. More than 200 color photographs depict the houses as they appear today, including architectural details and interior views. More than 200 black-and-white photographs provide a glimpse of St. Louis's past. Every house that has stood in either Westmoreland or Portland is shown. All of these mansions were designed by architects, many of them of national or international reputation, and an essay by Esley Hamilton supplies additional information on the architects and the styles in which they worked. A Chronology of Owners presents the ownership dates for every resident, past and present.

The engaging text and the beautiful illustrations combine to make this book pleasurable reading for everyone interested in either the St. Louis of the past or the city of the present.

Julius K. Hunter is an Anchorman at KMOV-TV in St. Louis. He has hosted a call-in-program at KMOX Radio, and he wrote the popular "Past Times" column for the St. Louis Post-Dispatch. He is also the author of Kingsbury Place: The First 200 Years (C. V. Mosby Company, 1982).

In Westmoreland and Portland Places Julius K. Hunter traces a century of two St. Louis private streets, focusing on the way of life that produced the elegant houses described in a separate essay by Esley Hamilton, an architectural historian."--New York Times Book Review

"Westmore and Portland Places is attractive enough to be a best-selling cocktail table' book, but it is considerably more than that. Well written and thoroughly researched, it offers a great deal for the reader. . . . While not unique to St. Louis, the private street flourished here as nowhere else, and these opulent examples, occupied and treasured, are of more than local interest. They are worthy of the book, and the book is worthy of them."--West End Word

"A fascinating architectural tour of one of the premier private places in the nation. . . The 400 photographs here are a luscious feast of American architecture. Authour Hunter has tastefully assembled these photos and written in an admiring manner of this unusual architectural area. Captivating."--Book Reader

"Hunter weaves wonderful stories about St. Louis' two premier private places while artfully describing them and their ornate opulence. . . . Westermoreland and Portland Places is a must.' Julius Hunter's masterful treatment of the subject is thorough and concise in every authentic detail."--St. Louis Marketplace--A Forum

"The elaborate coffee table book,' with more than 200 pictures in color, delves into the history and architecture of two of America's existing private streets, both in St. Louis."--St. Joseph New-Press

"Westmore and Portland are the grandest remnants of the golden era of private places."--Spirit: Quarterly Newsletter of the Missouri Historical Society