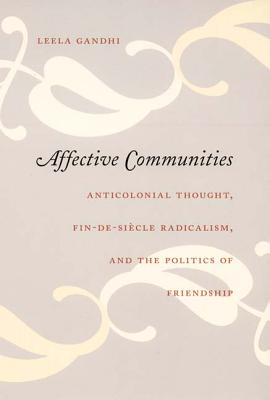 By Leela Gandhi
$30.99
Not on our shelves at the moment, but we will order it for you.

"If I had to choose between betraying my country and betraying my friend, I hope I should have the guts to betray my country." So E. M. Forster famously observed in his Two Cheers for Democracy. Forster's epigrammatic manifesto, where the idea of the "friend" stands as a metaphor for dissident cross-cultural collaboration, holds the key, Leela Gandhi argues in Affective Communities, to the hitherto neglected history of western anti-imperialism. Focusing on individuals and groups who renounced the privileges of imperialism to elect affinity with victims of their own expansionist cultures, she uncovers the utopian-socialist critiques of empire that emerged in Europe, specifically in Britain, at the end of the nineteenth century. Gandhi reveals for the first time how those associated with marginalized lifestyles, subcultures, and traditions-including homosexuality, vegetarianism, animal rights, spiritualism, and aestheticism-united against imperialism and forged strong bonds with colonized subjects and cultures.

Gandhi weaves together the stories of a number of South Asian and European friendships that flourished between 1878 and 1914, tracing the complex historical networks connecting figures like the English socialist and homosexual reformer Edward Carpenter and the young Indian barrister M. K. Gandhi, or the Jewish French mystic Mirra Alfassa and the Cambridge-educated Indian yogi and extremist Sri Aurobindo. In a global milieu where the battle lines of empire are reemerging in newer and more pernicious configurations, Affective Communities challenges homogeneous portrayals of "the West" and its role in relation to anticolonial struggles. Drawing on Derrida's theory of friendship, Gandhi puts forth a powerful new model of the political: one that finds in friendship a crucial resource for anti-imperialism and transnational collaboration.

Leela Gandhi teaches at La Trobe University in Melbourne, Australia. She is the author of Postcolonialism: A Critical Introduction, a coauthor of England in Twentieth-Century Fiction: Through Colonial Eyes, and a coeditor of the journal Postcolonial Studies.