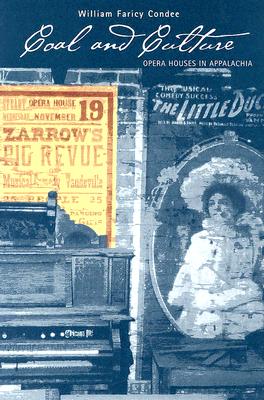 Opera houses were fixtures of Appalachian life from the end of the Civil War through the 1920s. Most towns and cities had at least one opera house during this golden age. Coal mining and railroads brought travelers, money, and change to the region. Many aspects of American life converged in the opera house.

Coal and Culture: Opera Houses in Appalachia is a critical appreciation of the opera house in the coal-mining region of Appalachia from the mid-1860s to the early 1930s. Author William Faricy Condee demonstrates that these were multipurpose facilities that were central to the life of their communities. In the era before radio, movies, television, and malls, these buildings were essential. They housed little, if any, opera, but were used for almost everything else, including traveling theater, concerts, religious events, lectures, commencements, boxing matches, benefits, union meetings, and—if the auditorium had a flat floor—skating and basketball.

The only book on opera houses that stresses their cultural context, Condee’s unique study will interest cultural geographers, scholars of Appalachian studies, and all those who appreciate the gaudy diversity of the American scene.

William Faricy Condee is a professor of theater and the director of the School of Interdisciplinary Arts at Ohio University. He is the author of Theatrical Space: A Guide for Directors and Designers. His articles about theater architecture have appeared in numerous journals in the United States and the United Kingdom.

“A unique combination of entertainment history and Appalachian history…. Condee demonstrates that the region was not as isolated as often thought and that opera houses increased the region’s exposure to various cultural aspects.”—H-Appalachia

“What makes this study of value and also unique is Condee’s approach to the topic. It is a useful analysis of the opera house as a reflector and location of local culture in far more ways than traditional performance. A real attraction is the