Rise and Decline of the Redneck Riviera: An Insider's History of the Florida-Alabama Coast (Paperback) 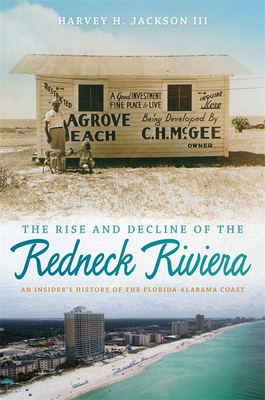 Rise and Decline of the Redneck Riviera: An Insider's History of the Florida-Alabama Coast (Paperback)

The Rise and Decline of the Redneck Riviera traces the development of the Florida-Alabama coast as a tourist destination from the late 1920s and early 1930s, when it was sparsely populated with "small fishing villages," through to the tragic and devastating BP/Deepwater Horizon oil spill of 2010.

Harvey H. Jackson III focuses on the stretch of coast from Mobile Bay and Gulf Shores, Alabama, east to Panama City, Florida--an area known as the "Redneck Riviera." Jackson explores the rise of this area as a vacation destination for the lower South's middle- and working-class families following World War II, the building boom of the 1950s and 1960s, and the emergence of the Spring Break "season." From the late sixties through 1979, severe hurricanes destroyed many small motels, cafes, bars, and early cottages that gave the small beach towns their essential character. A second building boom ensued in the 1980s dominated by high-rise condominiums and large resort hotels. Jackson traces the tensions surrounding the gentrification of the late 1980s and 1990s and the collapse of the housing market in 2008. While his major focus is on the social, cultural, and economic development, he also documents the environmental and financial impacts of natural disasters and the politics of beach access and dune and sea turtle protection.

The Rise and Decline of the Redneck Riviera is the culmination of sixteen years of research drawn from local newspapers, interviews, documentaries, community histories, and several scholarly studies that have addressed parts of this region's history. From his 1950s-built family vacation cottage in Seagrove Beach, Florida, and on frequent trips to the Alabama coast, Jackson witnessed the changes that have come to the area and has recorded them in a personal, in-depth look at the history and culture of the coast.

HARVEY H. JACKSON III is Eminent Scholar in History at Jacksonville State University. His many books include Lachlan McIntosh and the Politics of Revolutionary Georgia (Georgia), Rivers of History: Life on the Coosa, Tallapoosa, Cahaba, and Alabama, and Inside Alabama: A Personal History of My State.

"Hardy Jackson writes about the Redneck Riviera with an insight and love that makes you want to travel back in time and stick your toes in the sands of its history. He makes you want to splash in the water when it was still clear, and sway in a hammock before condominiums eclipsed the sky. He makes you want to shake hands with the pirates and reprobates who once roamed here, in a time when it was apparently perfectly legal to shoot your ex-wife as long as you warned her not to come within shooting range. This is more than a history of a place and its brushes with disaster—the BP spill—and its changing social landscape. It is a story of a coast and a man's relationship with it. Those of us who have stared into that blue-green water have waited on this book for a long time."—Rick Bragg, author of The Prince of Frogtown


"This is a splendid social history, and Hardy Jackson, a native son of the coastal South, was born to write it. His witty prose combines the rigor of the trained scholar, the sharp eye of a journalist, and the unsentimental affection of a skilled memoirist. The result is the best guide yet to a geographic region that is also a cultural state of mind. I had as much fun reading it as I had on my first trip to Panama City Beach circa 1948."—Howell Raines, author of My Soul Is Rested


"Harvey Jackson’s Redneck Riviera is pure delight. From the Gilded Age resort hotels and the first mom 'n' pop motels, to Spring Break, mullet-tossing contests, and the 2010 Gulf oil spill, Jackson chronicles the booms and busts that have shaped his beloved Gulf Coast. He has the keen detachment of a historian and the passion of someone who cares deeply about sand dunes and honky-tonk bars."—Gary R. Mormino, Frank E. Duckwall professor of Florida history, University of South Florida St. Petersburg


"Even if you're not a redneck, you will want to go to the Alabama coastline when you read Harvey H. Jacksons III's new book, The Rise and Decline of the Redneck Riviera. . . . If there was ever a person that could tell the personal and historical story of the Redneck Riviera, it's Jackson, Eminent Scholar in History at Jacksonville State University."—Theresa Shadrix, The Jacksonville News


"Whether or not you have an attachment to the Gulf Coast, you'll find much that is interesting and entertaining in The Rise and Decline of the Redneck Riviera. . . . Mr. Jackson's personal perspective enhances rather than interferes with his analysis, and his lucid, often pithy writing makes this book an engaging read."—Ray Hartwell, The Washington Times


"Reared in Clarke County, Ala., chasing 'submarines and alligators' along the Alabama River and whiling summers away on the Florida Panhandle, Jackson is as far from a tweedy academic as it is possible to imagine. He looks good in shorts, T-shirt and flip-flops, glories in offshore fishing, and loves the Flora-Bama with a passion to match that of any bubba. And, man, can he write. If after finishing this beer-soaked and sand-whipped tour de force you don't find yourself heading to the beach, check your pulse."—John Sledge, Mobile Press-Register


"Hardy Jackson brings to this job all the right tools. . . . [H]e can personalize history, narrate history in a highly readable fashion and commit sociology in the best possible way, from personal experience and keen observation. . . . It is all here. Some chapters generate nostalgia, some anger, fear and loathing. All chapters can educate us and make readers think about what they value most..."—Don Noble, Alabama Public Radio

"The most endangered species native to Florida's Panhandle and Alabama's Gulf Coast might just be the redneck. . . . The Rise and Decline of the Redneck Riviera is a fun romp through a place that has long been dedicated to fun but it also dips its toes into the cultural conflicts the region has experienced--a bit history, a bit social commentary and a good read."—Susannah Nesmith, Miami Herald