Mighty Fitz: The Sinking of the Edmund Fitzgerald (Paperback) 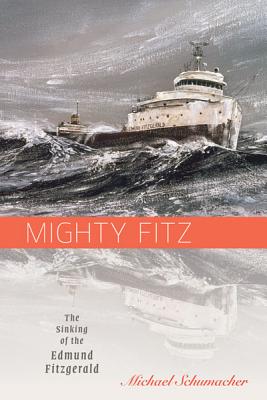 The Edmund Fitzgerald, a colossal ore carrier, had been fighting her way through a pounding November storm on Lake Superior. Then the Fitz’s radar went out, and she started to take on water. Despite gale-force winds and thirty-foot seas, there was no reason to think the Fitz wouldn’t find safe harbor at Whitefish Point, Michigan. The last words from the Fitz’s captain, Ernest McSorley, was “We are holding our own.” By all indications, the crew had no idea they were in mortal danger before they plunged to Lake Superior’s bottom with no chance to call for help.

Michael Schumacher relates in vivid detail the story of the Edmund Fitzgerald, her many years on the waters of the Great Lakes, the fateful final day, the search efforts and investigation, as well as the speculation and controversy that followed in the wake of the disaster. A fitting tribute to one of the largest ships to have sailed the Great Lakes and the men who tragically lost their lives, Mighty Fitz provides a comprehensive look at the most legendary shipwreck on America’s inland waters.

A lifelong resident of the Great Lakes region, Michael Schumacher is the author of twelve books, including biographies of Allen Ginsberg, Phil Ochs, and Eric Clapton, and the award-winning book Wreck of the Carl D. He has also written twenty-five documentaries on Great Lakes shipwrecks and lighthouses.