Monstrous Youth: Transgressing the Boundaries of Childhood in the United States (Paperback) 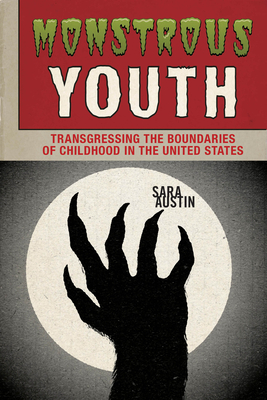 Monstrous Youth: Transgressing the Boundaries of Childhood in the United States (Paperback)


Ships quickly (1-7 days)
The monstrous has a long, complicated history within children’s popular media. In Monstrous Youth: Transgressing the Boundaries of Childhood in the United States, Sara Austin traces the evolution of monstrosity as it relates to youth culture from the 1950s to the present day to spotlight the symbiotic relationship between monstrosity and the bodies and identities of children and adolescents. Examining comics, films, picture books, novels, television, toys and other material culture—including Monsters, Inc. and works by Mercer Mayer, Maurice Sendak, R. L. Stine, and Stephanie Meyer—Austin tracks how the metaphor of monstrosity excludes, engulfs, and narrates difference within children’s culture.

Analyzing how cultural shifts have drastically changed our perceptions of both what it means to be a monster and what it means to be a child, Austin charts how the portrayal and consumption of monsters corresponds to changes in identity categories such as race, sexuality, gender, disability, and class. In demonstrating how monstrosity is leveraged in service of political and cultural movements, such as integration, abstinence-only education, and queer rights, Austin offers insight into how monster texts continue to reflect, interpret, and shape the social discourses of identity within children’s culture.

Sara Austin teaches in the Department of Global and Intercultural Studies at Miami University. Her articles have appeared in International Research in Children’s Literature, The Lion and the Unicorn, and Journal of Graphic Novels & Comics, among other journals.

“Through keen and timely observations about monsters as cultural products directed towards children, Monstrous Youth expands the critical conversation about monstrosity in American culture and reveals a great deal about the shifting perceptions of youth, innocence, race, class, gender, and outsiders.” ––Jessica R. McCort, author of Reading in the Dark: Horror in Children’s Literature and Culture

“Austin skillfully weaves together material from a range of disciplines––queer theory, children’s literature, film, print media––to illuminate a fresh perspective on the study of monsters and the monstrous. A pleasure to read, from start to finish.” ––Michelle Ann Abate, author of No Kids Allowed: Children’s Literature for Adults