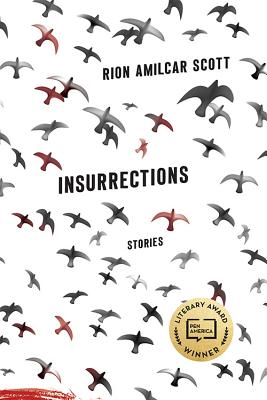 By Rion Amilcar Scott
$19.95
On Our Shelves Now
(This book cannot be returned.)

These 13 stories take place in the fictional Cross River, MD. A largely black town formed in the early 19th century following a slave revolt. My favorite story is “Juba”. On his way to a job interview with an accounting firm, the narrator is mistaken for the infamous drug dealer, Juba, and is arrested. He is released and decides to track Juba down and finds that Juba doesn’t just deal drugs but plays an important role in conserving the culture of Cross River. What starts out with a frank, in your face, scene becomes a very transforming story that I loved! - randy

A suicidal father looks to an older neighbor -- and the Cookie Monster -- for salvation and sanctuary as his life begins to unravel. A man seeking to save his estranged, drug-addicted brother from the city's underbelly confronts his own mortality. A chess match between a girl and her father turns into a master class about life, self-realization, and pride: "Now hold on little girl.... Chess is like real life. The white pieces go first so they got an advantage over the black pieces."

These are just a few glimpses into the world of the residents of the fictional town of Cross River, Maryland, a largely black settlement founded in 1807 after the only successful slave revolt in the United States. Raw, edgy, and unrelenting yet infused with forgiveness, redemption, and humor, the stories in this collection explore characters suffering the quiet tragedies of everyday life and fighting for survival.

In Insurrections, Rion Amilcar Scott's lyrical prose authentically portrays individuals growing up and growing old in an African American community. Writing with a delivery and dialect that are intense and unapologetically current, Scott presents characters who dare to make their own choices -- choices of kindness or cruelty -- in the depths of darkness and hopelessness. Although Cross River's residents may be halted or deterred in their search for fulfillment, their spirits remain resilient -- always evolving and constantly moving.

Rion Amilcar Scott teaches English at Bowie State University. He earned an MFA at George Mason University, where he won both the Mary Roberts Rinehart Award and a Completion Fellowship. His work has appeared in publications such as the Kenyon Review, Crab Orchard Review, PANK, The Rumpus, Fiction International, the Washington City Paper, The Toast, and Confrontation.