Soul of the Age: A Biography of the Mind of William Shakespeare (Paperback) 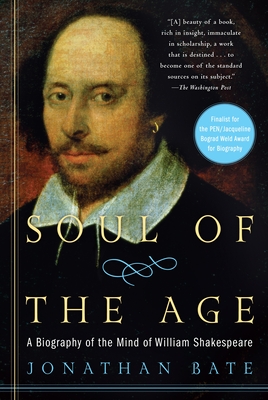 “One man in his time plays many parts,
His acts being seven ages.”

In this illuminating, innovative biography, Jonathan Bate, one of today’s most accomplished Shakespearean scholars, has found a fascinating new way to tell the story of the great dramatist. Using the Bard’s own immortal list of a man’s seven ages in As You Like It, Bate deduces the crucial events of Shakespeare’s life and connects them to his world and work as never before.

Here is the author as an infant, born into a world of plague and syphillis, diseases with which he became closely familiar; as a schoolboy, a position he portrayed in The Merry Wives of Windsor, in which a clever, cheeky lad named William learns Latin grammar; as a lover, married at eighteen to an older woman already pregnant, perhaps presaging Bassanio, who in The Merchant of Venice won a wife who could save him from financial ruin. Here, too, is Shakespeare as a soldier, writing Henry the Fifth’s St. Crispin’s Day speech, with a nod to his own monarch Elizabeth I’s passionate addresses; as a justice, revealing his possible legal training in his precise use of the law in plays from Hamlet to Macbeth; and as a pantaloon, an early retiree because of, Bate postulates, either illness or a scandal. Finally, Shakespeare enters oblivion, with sonnets that suggest he actively sought immortality through his art and secretly helped shape his posthumous image more than anyone ever knew.

Equal parts masterly detective story, brilliant literary analysis, and insightful world history, Soul of the Age is more than a superb new recounting of Shakespeare’s experiences; it is a bold and entertaining work of scholarship and speculation, one that shifts from past to present, reality to the imagination, to reveal how this unsurpassed artist came to be.

Jonathan Bate is a professor of Shakespeare and Renaissance literature at the University of Warwick. Widely known as a critic, award-winning biographer, and broadcaster, Bate is the author of several books on Shakespeare and principal editor of the Modern Library’s and Royal Shakespeare Company’s highly acclaimed William Shakespeare: Complete Works.

“Enthralling, the most eloquent evocation of Shakespeare one is ever likely to encounter.”—Times Literary Supplement, U.K.

“It is almost impossible to write something fresh about William Shakespeare. Yet Jonathan Bate has succeeded, with a sparkling and arresting portrait of the Bard and his world as discovered in his writings.”—The Economist (named one of the best books of 2008)

“Thoughtful, well-researched and even playful . . . An excellent resource for students of English literature and the Elizabethan era.”—Publishers Weekly

“Soul of the Age is the most artful, intriguing, and satisfying study of the mind of William Shakespeare we now possess. No other biography has used Shakespeare’s works so resourcefully to shed light on his life; few have so successfully mined the records of his life to illuminate the works. Each chapter shines with new discoveries, original insights, and dazzling prose. This is a major achievement from a master of Shakespeare studies.”—David Armitage, Lloyd C. Blankfein Professor of History, Harvard University

“Surprising, fresh and anything but le pot rechauffé . . . [Bate] has the gift of a true teacher–able at once to educate and to entertain. . . . After reading Soul of the Age I felt closer to the soul of Shakespeare.”—The Guardian,U.K.

“There can only be a handful of people in the world who know as much about Shakespeare as Bate, and it is intensely enjoyable to watch him bringing his knowledge to bear. He has the conjuror’s art of suspense, and you find yourself gasping with pleasure at the neatness of his conclusions. Few books pack so much new thinking about Shakespeare between their covers.”—Sunday Times, U.K.

“Bate is both a considerable scholar and an excellent writer, and he achieves a resonant and complex portrait, constantly alert to new lines of enquiry and unexpected connections. . . . [This] is a triumph of precision, learning and intelligent innovation.”—The Telegraph, U.K.