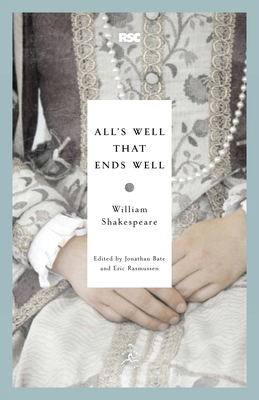 
On Our Shelves Now
“A young man married is a man that’s marr’d.”
—All’s Well That Ends Well

• an original Introduction to All’s Well That Ends Well
• incisive scene-by-scene synopsis and analysis with vital facts about the work
• commentary on past and current productions based on interviews with leading directors, actors, and designers
• photographs of key RSC productions
• an overview of Shakespeare’s theatrical career and chronology of his plays

Ideal for students, theater professionals, and general readers, these modern and accessible editions from the Royal Shakespeare Company set a new standard in Shakespearean literature for the twenty-first century.
William Shakespeare (1564–1616) was a poet, playwright, and actor who is widely regarded as one of the most influential writers in the history of the English language. Often referred to as the Bard of Avon, Shakespeare's vast body of work includes comedic, tragic, and historical plays; poems; and 154 sonnets. His dramatic works have been translated into every major language and are performed more often than those of any other playwright.