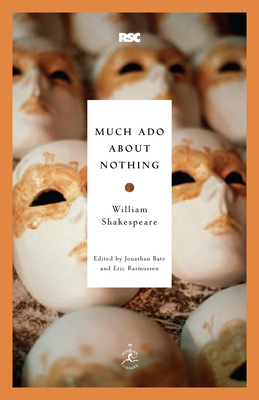 
Ships quickly (1-7 days)
Set in a courtly world of masked revels and dances, this play turns on the archetypal story of a lady falsely accused of unfaithfulness, spurned by her bridegroom, and finally vindicated and reunited with him. Villainy, schemes, and deceits threaten to darken the brilliant humor and sparkling wordplay–but the hilarious counterplot of a warring couple, Beatrice and Benedick, steals the scene as the two are finally tricked into admitting their love for each other in Shakespeare’s superb comedy of manners.

Each Edition Includes:
• Comprehensive explanatory notes
• Vivid introductions and the most up-to-date scholarship
• Clear, modernized spelling and punctuation, enabling contemporary readers to understand the Elizabethan English
• Completely updated, detailed bibliographies and performance histories
• An interpretive essay on film adaptations of the play, along with an extensive filmography
WILLIAM SHAKESPEARE (1564-1616) is today's most widely known and loved playwright.THE ROYAL SHAKESPEARE COMPANY (RSC) is a world-renowned ensemble theater company in Stratford and London dedicated to bringing the works of Shakespeare and his contemporaries to a modern audience.JONATHAN BATE is a professor of Shakespeare and Renaissance Literature at the University of Warwick. A prominent critic, award-winning biographer and broadcaster, Bate's books on Shakespeare include Soul of the Age.ERIC RASMUSSEN, professor of English at the University of Nevada, is one of today's leading textual experts on Shakespeare.