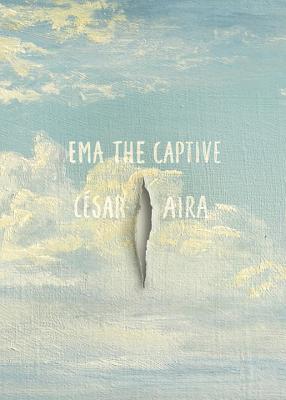 Let Cesar Aira whisk you away to the dreamy forests of Argentina, in the days of the colonies, when money was nothing more than scraps of inked paper. Like life, this book is a miraculous adventure!

“Ema, the Captive is a gentle meditation on the natural world in its grotesqueness and its beauty, humanity's place within it, and the effect that human progress has had on both. With his usual incredible attention to detail and in measured, lucid prose, Aira somehow turns this tale into a page-turner, the kind of feat only he could accomplish.”
— Justin Souther (E), Malaprop's Bookstore/Cafe, Asheville, NC

Ema The Captive, César Aira’s second novel, is perhaps closest in style to his popular An Episode in the Life of a Landscape Painter and The Hare

In nineteenth-century Argentina, Ema, a delicate woman of indeterminate origins, is captured by soldiers and taken, along with with her newborn babe, to live as a concubine in a crude fort on the very edges of civilization. The trip is appalling (deprivations and rapes prevail along the way), yet the real story commences once Ema arrives at the fort, where she takes on a succession of lovers among the soldiers and Indians, leading to a brave and grand entrepreneurial experiment. As is usual with Aira’s work, the wonder of the book is in the details of customs, beauty, and language, and the curious, perplexing reality of human nature.

Nominated for a Neustadt award and the Man Booker International Prize, CÉSAR AIRA was born in Coronel Pringles, Argentina, in 1949. He has published at least one hundred books and recently created a limited edition, “The Valise,” for the Museum of Modern Art, NYC.

The poet CHRIS ANDREWS teaches at the University of Western Sydney, Australia, where he is a member of the Writing and Society Research Centre. He has translated books by Roberto Bolano and César Aira for New Directions. He has won the Anthony Hecht Poetry Prize for his poetry and the Valle-Inclan Prize and the French-American Foundation Translation Prize for his translations.

Playing with recycled images, stretching tired tropes until they deform,
Aira is fascinated by how defining and describing reality, however
absurdly, can end up creating a new reality in that image.
— Bookforum

In this magical little Frisbee of a novel by the prolific Argentine, a kidnapped woman seduces her captors in a fort at the edge of civilization, turning the tables on their power.
— Boston Globe

An elegant, almost ethereal story of one woman's survival.
— Kirkus

His latest book to be translated, Ema the Captive, is not only one of his earliest books—it may be his finest. As such, it also works as a perfect introduction to the Aira universe. The world of Ema is lush and fantastic, but never overbearing; the reader is immersed in a landscape still teetering on the edge of innocence, awash with animals and scents almost impossible to imagine in our modern times. From body-painting to lantern-lit caves to the mating of manatees, the world that Ema—and the lucky reader—inhibit is wondrous and new, even if it’s the imagined past.

"Aira is firmly in the tradition of Jorge Luis Borges and W. G. Sebald, those great late modernists for whom fiction was a theater of ideas."
— Mark Doty - Los Angeles times

"What a gift: to look forward to reading a new Aira novel from New Directions every year for the rest of one's life."
— Thomas McGonigle - Los Angeles Times

Despite the earliness with which Ema was created in Aira’s career, it
appears fully realized with its own urgency and odd power. Aira’s rigor,
which Rivka Galchen has described as one normally reserved for
scientific or philosophical inquiry, remains at odds with his
characteristic arbitrariness.
— Music & Literature

One of the Argentine master's oldest works, Ema is also one of his most memorable. César Aira is a creature of seemingly endless invention.

A Lampoon of our need for narrative. No one today does megafiction like Aira.
— Robyn Creswell - Paris Review

César Aira is the undisputed master of the short philosophical novel—and he manages to churn out a new one every few years. Like all of his books, Ema the Captive is an ideal place to start reading Aira. This story of an Argentinian woman's time as a captive concubine is a powerful novel worth reading ASAP.
— Lucas Iberico Lozada - Paste Magazine

Aira stresses the sublime without falling back on the props of magical realism.
— Cristopher byrd - The Believer

Cesar Aira is wild. The laws of gravity do not apply.
— James S. A. Correy - The Denver Post

"One of Argentina's leading contemporary writers."
— William Skidelsky - The Guardian

"Everything in Aira has that Mad Scientist feel to it."
— The Millions

"His novels are eccentric clones of reality, where the lights are brighter, the picture is sharper, and everything happens at the speed of thought."
— Jacob Mikanowski - The Millions

A distinctive hallucinatory style, which blends together reality and fiction, the waking world and the dream world.
— Chloe Schama - The New Republic

"Aira seems fascinated by the idea of storytelling as invention, invention as improvisation, and improvisation as transgression, as getting away with something."
— The New York Review of Books

"Aira oversteps the bounds of realism, forcing the world to live up to his imagination."
— Benjamin Lytal - The New York Sun

"Exhilarating. Cesar Aira is the Duchamp of Latin American literature. Aira is one of the most provocative and idiosyncratic novelists working in Spanish today and should not be missed."
— Natasha Wimmer - The New York Times

"Aira's cubist eye sees from every angle. the stories in "the Musical Brain" exhibit the continuing narration of Aira's improvisational mind. his characters - whether comic-strip ruffians, apes, subatomic particles or a version of his boyhood self - enter a shifting and tilting landscape of events that unhinge our temporal existence and render it phantasmagorical yet seemingly everyday in the unfolding. His matter-of-fact approach, accepting even the most outlandish episodes, suspends disbelief and encourages one's own sense of displacement, of being released from the commonplace. Hail Cesar!"
— Patti Smith - The New York Times Book Review

“Ema” is as inventive and aphoristic as Aira’s best works.
— Alena Graedon - The New Yorker

"Aira delivers one surreal unraveling of reality after another that proceeds paradox by paradox into psychic realms."
— Michael Upchurch - The Seattle Times

"Argentine author Cesar Aira is an exquisite miniaturest who toys with avant-garde techniques. His work has drawn comparisons to Vladimir Nabokov and Italo Calvino for its gleeful literary gamesmanship and stories-within-stories."
— The Wall Street Journal

"Cesar Aira's writing has the freedom of improvisation, but his thought is informed by a coherent if highly personal matrix of concepts."
— Michael Eaude - Times Literary Supplement

Ema, the Captive creates a world that boldly asks us to rebel against convention, while seeking alternative avenues of thought.
— John Gibbs - ZYZZYVA

Ema, the Captive is a gentle meditation on the natural world in its grotesqueness and its beauty, humanity’s place within it, and the effect that human progress has had on both. With his usual incredible attention to detail and in measured, lucid prose, Aira somehow turns this tale into a page-turner, the kind of feat only he could accomplish.

I get so absorbed by an Aira novel that upon finishing I don't remember anything. It's like having a complex cinematic dream that dissipates upon awakening.
— Patti Smith

"Once you start reading Aira, you don't want to stop."
— Roberto Bolano

Aira’s literature is but a parody of inventiveness, and at its core is an amazing degree of penetrating and unrelenting critical reflexivity.
— Nicolás Guagnini - Artforum