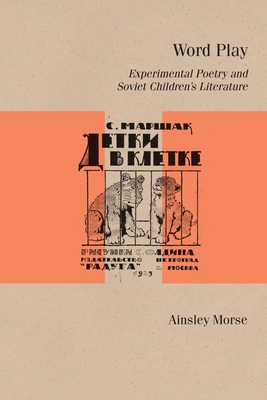 Word Play traces the history of the relationship between experimental aesthetics and Soviet children’s books, a relationship that persisted over the seventy years of the Soviet Union’s existence. From the earliest days of the Soviet project, children’s literature was taken unusually seriously—its quality and subject matter were issues of grave political significance. Yet, it was often written and illustrated by experimental writers and artists who found the childlike aesthetic congenial to their experiments in primitivism, minimalism, and other avant-garde trends. In the more repressive environment following Stalin’s rise to power, experimental aesthetics were largely relegated to unofficial and underground literature, but unofficial writers continued to author children’s books, which were often more appealing than adult literature of the time.

Word Play focuses on poetry as the primary genre for both children’s and unofficial literature throughout the Soviet period. Five case studies feature poets-cum-children’s writers—Leonid Aronzon, Oleg Grigoriev, Igor Kholin, Vsevolod Nekrasov, and Dmitri Prigov—whose unpublished work was not written for children but features lexical and formal elements, abundant humor, and childlike lyric speakers that are aspects of the childlike aesthetic. The book concludes with an exploration of the legacy of this aesthetic in Russian poetry today. Drawing on rich primary sources, Word Play joins a growing literature on Russian children’s books, connecting them to avant-garde poetics in fresh, surprising ways.

AINSLEY MORSE is an assistant professor of Russian at Dartmouth College.

“In Word Play, Ainsley Morse expands the traditional understanding of Russian children’s poetry to include poetry written for adults, but with a childlike aesthetic. Combining cultural history with insightful analyses of the poetry itself, she covers both well-known and less celebrated poets from the last century, some of whose work has rarely been studied even in Russia. Morse’s idiomatic translations and lucid discussions make this important book accessible to a wide range of readers.”—Michael Wachtel, author of The Cambridge Introduction to Russian Poetry


“Word Play offers a welcome addition to the field and a novel contribution to the study of childlike elements in unofficial poetry in the Soviet Union. The book adds to the understanding of Russian poetry and unofficial literature, while simultaneously contributing to Russian children’s literature research, and literary studies in general. Ainsley Morse intriguingly highlights the role of elements of the childlike aesthetic in unofficial literature in the Soviet Union throughout the twentieth century and rightly challenges boundaries between literary categories defined by audience.” —Sara Pankenier Weld, author or Voiceless Vanguard: The Infantilist Aesthetic of the Russian Avant-Garde (Northwestern, 2014)


“Ainsley Morse is equally knowledgeable in the history of Soviet experimental (i.e. underground) poetry and Soviet poetry for children; each of these subjects is worthy of a large monograph. Through the concept of the childlike poetic voice, she shows how underground poets contributed to children’s literature, and how the childlike lyrical perspective facilitated their poetic discoveries. This sensitive and lively book, full of exciting texts and literary facts, brings to a new level both the studies of Soviet literary underground and Soviet literature for children.” —Mark Lipovetsky, coauthor of A History of Russian Literature

“In her fascinating study of the intertwining connections between Russian experimental poetry and children’s literature, Ainsley Morse has masterfully traced this complex relationship’s trajectory, from the childlike aesthetics of the Russian avant-garde of the 1920s to the unofficial poetry of the 1970s-80s. Situating her analyses in an impressive historical framework, she challenges a whole array of commonplaces about children’s literature as an institution in the Soviet period. She invites her readers to look at Soviet-era children’s literature as a creative experimental outlet that enabled the exploration of infinitely innovative approaches to poetry, and ranged far beyond the ostensibly permissible.” —Marina Balina, coeditor of Russian Children's Literature and Culture

“Ainsley Morse writes about Soviet children’s poetry with grace, acuity, and wit. Her book celebrates talented Russian poets, many of whom are still little known to the Anglophone reader, and gives modern experimental poetics its proper place in relation to the children’s literary canon. Under Morse’s pen, the valuable theoretical notion of childlike aesthetics gains artistic elegance and a delightfully playful edge.” —Olga Voronina, editor of A Companion to Soviet Children's Literature and Film