The Ethics of Witnessing: The Holocaust in Polish Writers' Diaries from Warsaw, 1939-1945 (Cultural Expressions) (Paperback) 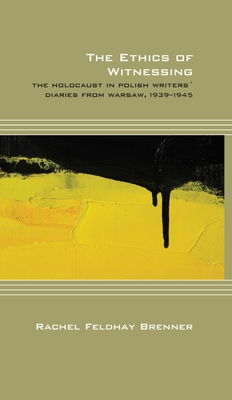 Winner, 2015 USC Book Award in Literary and Cultural Studies, for outstanding monograph published on Russia, Eastern Europe or Eurasia in the fields of literary and cultural studies

The Ethics of Witnessing investigates the reactions of five important Polish diaristswriters—Jaroslaw Iwaszkiewicz, Maria Dabrowska, Aurelia Wylezynska, Zofia Nalkowska, and Stanislaw Rembek—during the period when the Nazis persecuted and murdered Warsaw’s Jewish population. The responses to the Holocaust of these prominent prewar authors extended from insistence on empathic interaction with victims to resentful detachment from Jewish suffering. Whereas some defied the dehumanization of the Jews and endeavored to maintain intersubjective relationships with the victims they attempted to rescue, others selfdeceptively evaded the Jewish plight. The Ethics of Witnessing examines the extent to which ideologies of humanism and nationalism informed the diarists’ perceptions, proposing that the reality of the Final Solution exposed the limits of both orientations and ultimately destroyed the ethical landscape shaped by the Enlightenment tradition, which promised the equality and fellowship of all human beings.

RACHEL FELDHAY BRENNER is a Max and Frieda Weinstein-Bascom Professor of Jewish Studies and Modern Hebrew Literature at the Center for Jewish Studies at the University of Wisconsin, Madison. She is the author, among other books, of The Freedom to Write: The Woman-Artist and the World in Ruth Almog’s Fiction (2008) [in Hebrew], Inextricably Bonded: Israeli Jewish and Arab Writers Re-Visioning Culture (2003) and Writing as Resistance: Four Women Confronting the Holocaust: Edith Stein, Simone Weil, Anne Frank, and Etty Hillesum (1997).

"It is a trailblazing work…The Ethics of Witnessing by Rachel Brenner will undoubtedly become one of the most important frames of reference in future research of Polish attitudes toward the Holocaust. The author’s scholarly passion, buttressed by erudition and research skills, result in a book that cannot be ignored by anyone addressing the subjects raised within it."  —Yad Vashem

"This is an excellent book that deserves to be widely read."  —Slavic Review

"…a fascinating inquiry into the almost unbearable pressure to which [the Holocaust] subjected individuals’ sense of empathy." —Holocaust and Genocide Studies

"Brenner’s textual analysis is most impressive…The Ethics of Witnessing is an important and most welcome contribution and a must- read for everyone interested in the growing field of witnessing the genocide in wartime Eastern Europe, the well- established literature on Holocaust testimony, and the study of relations between Jews and non- Jews in occupied Poland." —The Polish Review