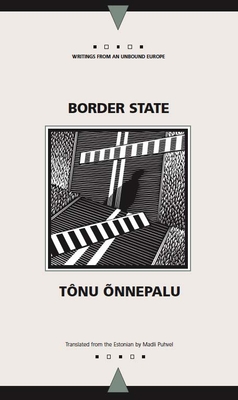 An immediate sensation upon its 1993 publication in Europe, already translated into more than a dozen languages, Border State is a brilliantly realized account of a man in the grip of Western excess, emotionally crippled by a world that is subsuming his own and inhabiting a West in which "all countries have become imaginary deserts of ruins where crowds of nomads roam from one attraction to the other." His tale, in which disillusion and murder become inextricably linked, is a compelling exploration of scarcity, longing, and madness.

TÔNU ŌNNEPALU was born in 1962 in Tallinn, Estonia. He originally published Border State under the pen name Emil Tode. In 1993 Border State received the Baltic Assembly Prize, the most prestigious literary award in the Baltic countries. The novel has since been translated into a dozen languages. Ōnnepalu lives in Tallinn and on the Estonian island of Hiiumaa.

MADLI PUHVEL divides her time between Estonia and California. She is the author of Symbol of Dawn, a biography of nineteenth-century Estonian poet Lydia Koidula.


"This short novel. . .speaks suggestively about the agony of 'hoping against hope,' the intensity of expecting the 'great indescribable' to happen, as in Ibsen's tragedies and Beckett's Waiting for Godot." —World Literature Today

"Offers a rare, brilliantly realized account of a lost man in the grip of Western excess, emotionally crippled by a world that is subsuming his own." —Translation Review