Follow Me Down to Nicodemus Town: Based on the History of the African American Pioneer Settlement (Hardcover) 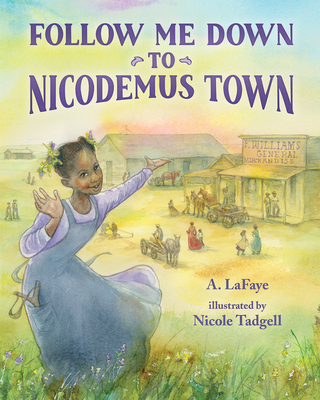 Follow Me Down to Nicodemus Town: Based on the History of the African American Pioneer Settlement (Hardcover)

By A. LaFaye, Nicole Tadgell (Illustrator)

When Dede sees a notice offering land to black people in Kansas, her family decides to give up their life of sharecropping to become homesteading pioneers in the Midwest. Inspired by the true story of Nicodemus, Kansas, a town founded in the late 1870s by Exodusters—former slaves leaving the Jim Crow South in search of a new beginning—this fictional story follows Dede and her parents as they set out to stake and secure a claim, finally allowing them to have a home to call their own.

A. LaFaye is best known for her Scott O’Dell Award-winning novel, Worth, but she’s written many other books, including the IRA Teacher’s Choice Walking Home to Rosie Lee, The Year of the Sawdust Man, Nissa’s Place, The Keening, Water Steps, and Stella Stands Alone. She lives in Illinois. Nicole Tadgell was born in Detroit and studied art at Wheaton College in Norton, Massachusetts. She has worked on more than 20 books, including With Books and Bricks, Real Sisters Pretend, and Friends for Freedom. She lives in Grafton, Massachusetts.

"That the many all-black settlements on the prairie have been whitewashed out of U.S. history makes this book an important one. Visually charming, enjoyable, and educational." —Kirkus Reviews

STARRED REVIEW! "The historic town of Nicodemus, Kansas, springs to life through expressive artwork done in softly fluid lines and hues, conveying all of the hope and joy of the movement." —Foreword Review

"An appealing picture book exploring a part of pioneer history that deserves to be more widely known." —Booklist