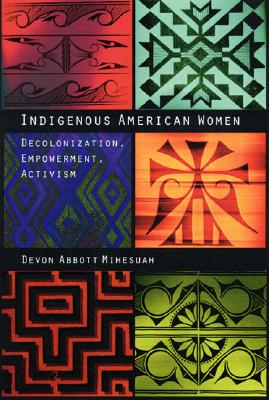 Oklahoma Choctaw scholar Devon Abbott Mihesuah offers a frank and absorbing look at the complex, evolving identities of American Indigenous women today, their ongoing struggles against a centuries-old legacy of colonial disempowerment, and how they are seen and portrayed by themselves and others. Mihesuah first examines how American Indigenous women have been perceived and depicted by non-Natives, including scholars, and by themselves. She then illuminates the pervasive impact of colonialism and patriarchal thought on Native women’s traditional tribal roles and on their participation in academia. Mihesuah considers how relations between Indigenous women and men across North America continue to be altered by Christianity and Euro-American ideologies. Sexism and violence against Indigenous women has escalated; economic disparities and intratribal factionalism and “culturalism” threaten connections among women and with men; and many women suffer from psychological stress because their economic, religious, political, and social positions are devalued. In the last section, Mihesuah explores how modern American Indigenous women have empowered themselves tribally, nationally, or academically. Additionally, she examines the overlooked role that Native women played in the Red Power movement as well as some key differences between Native women "feminists" and "activists."

Devon Abbott Mihesuah is a professor of applied Indigenous studies and history at Northern Arizona University. Her books include Cultivating the Rosebuds: The Education of Women at the Cherokee Female Seminary, 1851–1909 and Roads of My Relations.