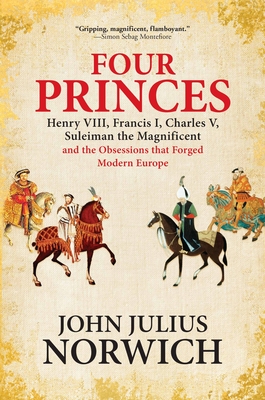 John Julius Norwich---the very model of a popular historian- (Wall Street Journal)--is acclaimed for his distinctive ability to weave together a fascinating narrative through vivid detail, colorful anecdotes, and captivating characters. Here, he has crafted a bold tapestry of Europe and the Middle East in the early sixteenth century, when four legendary rulers towered over the era.
Francis I of France was the personification of the Renaissance, and a highly influential patron of the arts and education. Henry VIII, who was not expected to inherit the throne but embraced the role with gusto, broke with the Roman Catholic Church and appointed himself head of the Church of England. Charles V was the most powerful industrious man of the time, and was unanimously elected Holy Roman Emperor. Suleiman the Magnificent--who stood apart as a Muslim--brought the Ottoman Empire to its apogee of political, military, and economic power.
Against the vibrant background of the Renaissance, these four men collectively shaped the culture, religion, and politics of their respective domains. With remarkable erudition, John Julius Norwich delves into this entertaining and layered history, indelibly depicting four dynamic characters and how their incredible achievements--and obsessions with one another--changed European history.

John Julius Norwich is the author of many publications, including A History of Venice and Byzantium, as well as the New York Times bestseller Absolute Monarchs: A History of the Papacy and most recently, Sicily: An Island at the Crossroads of History.