The Architecture of Baltimore: An Illustrated History (Hardcover) 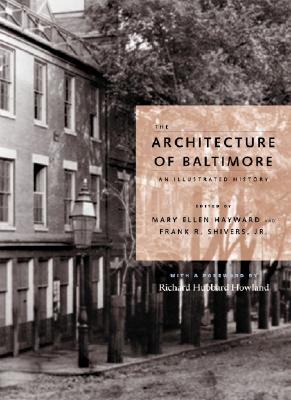 From its trademark row houses to Benjamin Henry Latrobe's landmark Cathedral (now Basilica) of the Assumption, Baltimore architecture can rightly claim to be as eclectic, exciting, and inspiring as that of any American city. Many of its important buildings figure prominently in the oeuvres of leading American architects: Latrobe, Robert Mills, Maximilien Godefroy, Richard Upjohn, Stanford White, and Ludwig Mies van der Rohe among them. Yet Baltimore's distinctive urban environment also owes much to the achievements of local talents, including Robert Cary Long Sr. and Jr., John Rudolph Niernsee and James Crawford Neilson, E. Francis Baldwin and Josias Pennington, Laurence Hall Fowler, Alexander Cochran--not to mention generations of skilled craftsmen and builders.

Baltimore's architecture rewards close study, and in The Architecture of Baltimore contributors and editors Mary Ellen Hayward and Frank R. Shivers, Jr., have brought together an impressive group of scholars, writers, and critics to provide a fresh account of the city's architectural history. The narrative begins by looking at eighteenth-century Georgian buildings that reflect the grandeur of the style, goes on to the prosperous port city's Federal-period achievements, including many country houses with their delicate details, then proceeds to Baltimore's monumental contributions to early nineteenth-century American neoclassical design. Romantic stylings follow, with excursions into the Greek and Gothic Revivals, and the popular Italianate-mode for town and country houses, the soaring spires of churches, and the classical dignity of public spaces like the Peabody Library. Later in the nineteenth century a picturesque eclecticism produced such monuments as the Johns Hopkins Hospital and the Baltimore & Ohio Railroad's Mount Royal Station, as well as intriguing changes to the city's versatile row houses. Contributors discuss the evolution of industrial buildings and the growth of the city's architectural profession. The Architecture of Baltimore also addresses the arrival of modernism in Charm City, examines the origins and challenges of historic preservation, and assesses the Baltimore renaissance of the period 1955-2000, which saw the construction of Charles Center, Harborplace, and the sports complex at Camden Yards.

Here at last we have a comprehensive guide to Baltimore's architectural heritage--lost and still-standing alike. Illustrated with nearly 600 photographs, architectural plans, maps, and details, this impressive work of scholarship also offers an engaging narrative of the history of Baltimore itself--its men and women of all stations, its taste and traditional preferences, its good choices and lamentable ones, and its built environment as a social and cultural chronicle.

Mary Ellen Hayward holds advanced degrees from the Winterthur Program in Early American Culture and Boston University. She is the co-author of The Baltimore Rowhouse, and serves as a free-lance architectural historian and museum consultant. Winner of the Baltimore City Historical Society 2003 History Honor, Frank R. Shivers, Jr. teaches at the Johns Hopkins University School of Professional Studies in Business and Education, where he was named Teacher of the Year. He is the author of Bolton Hill: Baltimore Classic, Maryland Wits & Baltimore Bards: A Literary History with Notes on Washington Writers, and Walking in Baltimore: An Intimate Guide to the Old City, the latter two available from Johns Hopkins, and co-author of Chesapeake Waters: Four Centuries of Controversy, Concern and Legislation.