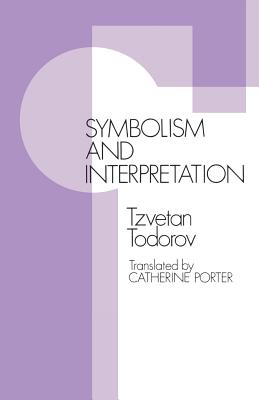 In Symbolism and Interpretation, Tzvetan Todorov examines two aspects of discourse: its production, which has traditionally been the domain of rhetoric, and its reception, which has always been the object of hermeneutics. He analyzes the diverse theories of symbolism and interpretation that have been elaborated over the centuries and considers their contribution to a general theory of verbal symbolism, discussing a wide range of thinkers, from the Sanskrit philosophers and Aristotle to the German Romantics and contemporary semioticians.

Todorov begins by examining general ideas of linguistic symbolism and the interpretive process. He then turns to a detailed consideration of two of the most influential and pervasive interpretative strategies in Western thought: the patristic exegesis of Augustine and Aquinas, and the philological exegesis foreshadowed in the work of Spinoza, developed by Wolf, Ast, Boeckh, and Lanson, and criticized by Schleiermacher. Todorov clarifies in masterly fashion the intricacies of the many schools of thought and refines the concepts crucial to critical theory today, including the distinctions between language and discourse, direct and indirect meaning, sign and symbol. Ably translated by Catherine Porter, Symbolism and Interpretation provides a coherent and innovative framework that is indispensable to the study of semiotics, its history, and its future.