While Europe Slept: How Radical Islam is Destroying the West from Within (Paperback) 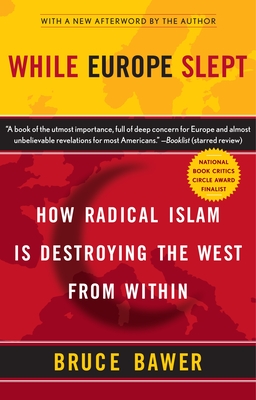 By Bruce Bawer
Email or call for price
Special Order

The struggle for the soul of Europe today is every bit as dire and consequential as it was in the 1930s. Then, in Weimar, Germany, the center did not hold, and the light of civilization nearly went out. Today, the continent has entered yet another “Weimar moment.” Will Europeans rise to the challenge posed by radical Islam, or will they cave in once again to the extremists?

As an American living in Europe since 1998, Bruce Bawer has seen this problem up close. Across the continent—in Amsterdam, Oslo, Copenhagen, Paris, Berlin, Madrid, and Stockholm—he encountered large, rapidly expanding Muslim enclaves in which women were oppressed and abused, homosexuals persecuted and killed, “infidels” threatened and vilified, Jews demonized and attacked, barbaric traditions (such as honor killing and forced marriage) widely practiced, and freedom of speech and religion firmly repudiated.

The European political and media establishment turned a blind eye to all this, selling out women, Jews, gays, and democratic principles generally—even criminalizing free speech—in order to pacify the radical Islamists and preserve the illusion of multicultural harmony. The few heroic figures who dared to criticize Muslim extremists and speak up for true liberal values were systematically slandered as fascist bigots. Witnessing the disgraceful reaction of Europe’s elites to 9/11, to the terrorist attacks on Madrid, Beslan, and London, and to the wars in Afghanistan and Iraq, Bawer concluded that Europe was heading inexorably down a path to cultural suicide.

Europe's Muslim communities are powder kegs, brimming with an alienation born of the immigrants’ deep antagonism toward an infidel society that rejects them and compounded by misguided immigration policies that enforce their segregation and empower the extremists in their midst. The mounting crisis produced by these deeply perverse and irresponsible policies finally burst onto our television screens in October 2005, as Paris and other European cities erupted in flames.

WHILE EUROPE SLEPT is the story of one American’s experience in Europe before and after 9/11, and of his many arguments with Europeans about the dangers of militant Islam and America’s role in combating it. This brave and invaluable book—with its riveting combination of eye-opening reportage and blunt, incisive analysis—is essential reading for anyone concerned about the fate of Europe and what it portends for the United States.

BRUCE BAWER is the author of A Place at the Table, a New York Times Notable Book of the Year, Stealing Jesus, and Diminishing Fictions. He served as a board member of the National Book Critics Circle and has written for the New York Times, the Washington Post Book World, the Wall Street Journal, the New Republic, and other periodicals.


“An honest and engaging account of a problem which, if left unaddressed, could engulf Europe in conflict. Europeans would do well to heed Mr. Bawer's advice and open their eyes.”


“Bawer paints an alarming picture of a continent in deep trouble and deeper denial—but now, perhaps, on the verge of waking up. Some books are merely important. This one is necessary.”

—Jonathan Rauch, senior writer and columnist for National Journal magazine in Washington and a correspondent for the Atlantic Monthly


“Bruce Bawer has produced a book that is at once riveting, disturbing, fascinating, chilling, and shocking. It is required reading for anyone who wants to understand how militant Islam has insinuated itself into the heart of the West.”

—Steven Emerson, Executive Director of the Investigative Project on Terrorism and author of American Jihad: The Terrorists Living Amongst Us


“Bruce Bawer brings an American’s sensibilities and a writer’s insights to bear on the insistence by West Europeans that they really do not have a Muslim problem. Backed by deep research and wide personal experience, he argues that this blind denial is leading the continent to certain disaster. Bawer makes his case moderately but eloquently and powerfully. Will Europeans heed his warning?”


“Bawer punctures the moral pretensions of our ‘betters’ in the Old World. Their supine acceptance of the Muslim oppression of women, their flatulent anti-Americanism, their renewed anti-Semitism—all are fully documented. There is something memorable on every page. Bawer writes with intelligence and passion. A fascinating analysis of Europe’s death spiral.”