What You See: A Jane Ryland Novel (Hardcover) 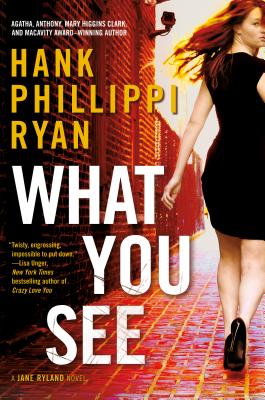 What You See: A Jane Ryland Novel (Hardcover)

This is book number 4 in the Jane Ryland series.

Why would a father abduct his own child? A wedding is planned in Jane Ryland's family, but there's a disaster instead. Nine-year-old Gracie-supposed to be the flower girl-has been taken by her stepdad. Where are they? Is the girl in danger? Reporter Jane Ryland learns there's a limit to the bonds of family-and learns to her peril what happens when loved ones are pushed too far.

Meanwhile, Detective Jake Brogan's got a doozy of a case. At Boston's historic Faneuil Hall, a man is stabbed to death in front of a crowd of tourists snapping photos of the murder on their cell phones. Solving the case should be easy, but the pictures and surveillance video lead him to a dark conspiracy of extortion and stolen lives.

Jane and Jake must explore where their loyalties lie-to each other? To their families? To their careers? If they make the wrong decision, the consequences could be fatal.

HANK PHILLIPPI RYAN has won five Agatha Awards, in addition to the Anthony, Macavity, Daphne du Maurier, and Mary Higgins Clark Award for her bestselling mystery novels. As an investigative reporter, her work has resulted in new laws, criminals sent to prison, homes saved from foreclosure, and millions of dollars in restitution for victims and consumers. Along with her 34 Emmys and14 Edward R. Murrow awards, Hank has received dozens of other honors for her ground-breaking journalism. A former president of Sisters in Crime and founder of MWA University, she lives in Boston with her husband, a nationally renowned civil rights and criminal defense attorney. She is the author of Trust Me, and the Jane Ryland series (The Other Woman, The Wrong Girl, Truth be Told, Say No More and What You See).

“Fully drawn characters, palpable suspense, and not one, but two unexpected endings are a plus.
” —Publishers Weekly

“Award-winner Ryan is a master of her craft...This is exceptional suspense written in Ryan's inimitable style.” —RT BookReviews (Top Pick!)

“Ryan...displays her trademark flair for knotty plotting...worth a night or two of breakneck reading.” —Kirkus Reviews