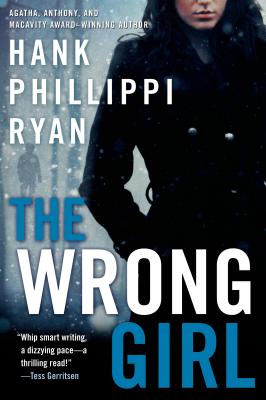 This is book number 2 in the Jane Ryland series.

Does a respected adoption agency have a frightening secret? Tipped off by a determined ex-colleague on a desperate quest to find her birth mother, Boston newspaper reporter Jane Ryland begins to suspect that the agency is engaging in the ultimate betrayal—reuniting birth parents with the wrong children.

For detective Jake Brogan and his partner, a young woman's brutal murder seems a sadly predictable case of domestic violence, one that results in two toddlers being shuttled into the foster care system. Then Jake finds an empty cradle at the murder scene. Where is the baby who should have been sleeping there?

Jane and Jake are soon on a trail full of twists and turns that takes them deep into the heart of a foster care system in crisis and threatens to blow the lid off an adoption agency scandal. When the threatening phone calls start, Jane knows she is on the right track…but with both a killer at large and an infant missing, time is running out….

The Wrong Girl is a riveting novel of familial relationships—both known and unknown—vile greed, senseless murder, and the ultimate in deception. What if you didn't know the truth about your own family?

The Wrong Girl is the winner of the 2013 Agatha Award for best contemporary novel.

HANK PHILLIPPI RYAN is the on-air investigative reporter for Boston's NBC affiliate. She has won 33 EMMYs, 13 Edward R. Murrow awards and dozens of other honors for her groundbreaking journalism. A bestselling author of mystery novels, Ryan has won multiple prestigious awards for her crime fiction: five Agathas, the Anthony, Daphne, Macavity, and for THE OTHER WOMAN, the coveted Mary Higgins Clark Award. National reviews have called her a "master at crafting suspenseful mysteries" and "a superb and gifted storyteller." Her 2013 novel, THE WRONG GIRL, won both the Agatha Award for Best Contemporary Novel and the Daphne Award for Mainstream Mystery/Suspense, and is a seven-week Boston Globe bestseller. TRUTH BE TOLD was the Agatha Award winner for Best Contemporary Novel, an Anthony Award nominee for Best Novel, and a Library Journal BEST BOOK OF 2014, with starred reviews from Booklist and from Library Journal. She also won a second Agatha Award in 2015 for Best Nonfiction, as editor of WRITES OF PASSAGE, an anthology of essays by mystery authors. Ryan's follow up to TRUTH BE TOLD is WHAT YOU SEE, which debuted in Fall 2015. She's a founding teacher at Mystery Writers of America University and 2013 president of national Sisters in Crime.

“Innocent bystanders beware! This series is off and running. You better hope you can catch up.” —Sue Grafton, New York Times bestselling author, on The Other Woman

“What a wonderful heroine! Anyone who loves smart, multi-dimensional characters will fall for Jane Ryland... It's a thrilling ride and thrilling read.” —Louise Penny, New York Times bestselling author, on The Other Woman