Down the Mysterly River (Hardcover) 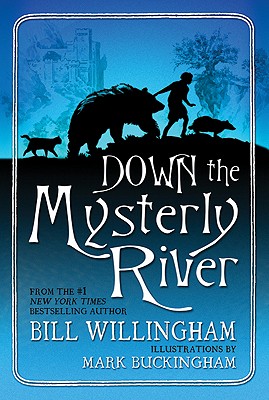 "Down the Mysterly River "is the children's book debut of Bill Willingham, the creator of the #1 "New York Times" bestselling graphic novel series Fables. Complete with illustrations by Fables artist Mark Buckingham, it is a spirited, highly original tale of adventure, suspense, and everlasting friendship.

Max "the Wolf" is a top notch Boy Scout, an expert at orienteering and a master of being prepared. So it is a little odd that he suddenly finds himself, with no recollection of his immediate past, lost in an unfamiliar wood. Even odder still, he encounters a badger named Banderbrock, a black bear named Walden, and McTavish the Monster (who might also be an old barn cat)-all of whom talk-and who are as clueless as Max.

Before long, Max and his friends are on the run from a relentless group of hunters and their deadly hounds. Armed with powerful blue swords and known as the Blue Cutters, these hunters capture and change the very essence of their prey. For what purpose, Max can't guess. But unless he can solve the mystery of the strange forested world he's landed in, Max may find himself and his friends changed beyond recognition, lost in a lost world

BILL WILLINGHAM is the critically-acclaimed, award-winning creator of several iconic comic book series, including the bestselling Fables franchise. In 2003, its first year of publication, "Fables" won the prestigious Eisner award for Best New Series, and has gone on to win fourteen Eisners to date. Bill lives in the wild and frosty woods of Minnesota.MARK BUCKINGHAM has been working in comics professionally for the past twenty two years, building a reputation for design, storytelling and a chameleon like diversity of art styles. Since 2002 Mark has been the regular artist on Fables, working with its writer and creator Bill Willingham, for which they have earned numerous comic industry awards.

Praise for the works of Bill Willingham:

“Eisner-winning comics creator Willingham (the Fables series) makes his middle-grade debut with an action-packed and often touching novel...that explores the nature of characters and authorship…The end result is a stellar example of a novel working both as an adventure tale and as metafiction.”—Starred review, Publishers Weekly